Without the moon the earth axis would tilt at 60° (instead of today's 23.5°), without the moon, the tropics would be covered in snow and ice, without the moon, the polar regions would be up to 80°C hot. In Central Europe, the sun would not set for months. No chance for higher developed species.
Our existence in the cosmos is completely accidental, I tell you. When our solar system was starting to be formed, a giant rock of about a tenth of the earth's size hit our unfinished planet. Accident, pure accident. It could have missed it just the same. But there it was, it changed the earth's crust into lava and spun it into space. There it rotated around the earth and solidified into the moon - which at the time was only about 20 000 km away (today 380 000 km).
In an interplay of mutual attractions, the moon slowed down earth's rotation resulting in the tides. The length of day expanded, the lunar orbit grew larger, the lunar breaking effect diminished.
This goes on even today. A day on earth increases by 20 micro seconds every year and the moon moves away from the earth by 3.8 cm every year.
In about 500 million years, the moon's supportive, life giving closeness will come to an end and the earth axis will tilt further and life as we know or imagine it will cease to exist.
There you go. We are just tiny spots of accidental happiness.

When I look west on my way home, this is what I see these days: 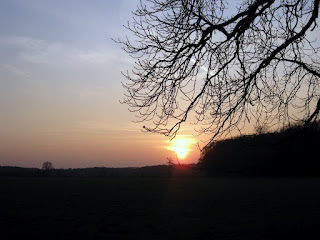