The building where I work - sporadically in these pandemic times - has a helicopter landing pad on its roof. It is one of several landing pads, this is a university clinics campus after all. Sometimes, when a helicopter lands while I sit at my desk, the reverberations create this roaring noise that seems to keep ringing inside me for a while after it's over.

This evening as I was unlocking my bicycle, a helicopter was just about to take off after bringing a patient and as usual, several people stood and watched. Patients out for a walk, visitors about to leave, staff coming or going. I looked up and saw the pilot getting in, shut the door and then the racket of the engine started. I have seen this many times. I usually find it is a reassuring sight, a patient delivered to the trauma unit, in safe hands at least. Tonight, though, I was fighting tears.

I cycled through the forest. As the clocks go back this weekend, it was the last bright evening. For the next four months, it will be dark now when I leave work - on the days I don't work from home. At the clearing with the two big meadows, the horses were grazing and trotting about with the sun setting behind them.  I stopped and took a picture and sent it to a friend who used to cycle along here with me, she has moved to Berlin and misses this forest badly. I also put on my mittens, once the sun sets, it gets really cold now. The end of October after all. 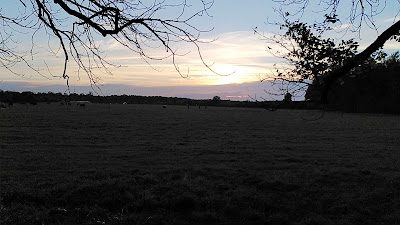 After dinner, the grandchild called and told us all about bottle feeding Daisy the lamb. We sang a few songs together before their day started in earnest and we settled down for our night time.

I watched the last episode of a tedious thriller on ITV, with an ending I have already forgotten, and switched to a German channel for yet another documentary about the deportations of German Jews during the last war years. On nights like this one, the weight of sorrow seems too heavy.

I am still on that weird path of further diagnostics, waiting for the next expert's review. It's a long and exhausting story. I don't sleep well. I wish I could find the words to comment on all your blogs.

This afternoon I cycled through the wind and rain to have the second MRI in five days. Before I left home, I took a zoloft that was three years past its expiration date, the last one of the small supply I was given for future MRI examinations after the spinal surgery in January 2017. Inside the white tunnel, I hummed my songs and called up images of my daughter's birthdays from age 1 to 12. The wind had grown stronger by the time I was finished and I pushed the bicycle through the swirling leaves to the whole food shop where I bought a vast supply of chocolate and a bottle of lavender woolen softener before cycling down to the river. By now it had started to rain heavily and I decided to shrug off the couldn't-care-less from the zoloft and go home, make tea and eat chocolate. I haven't eaten chocolate for ages.

The third meeting with a medical expert is in two days time. I am pretending to be cheerful. I haven't got what it takes quite yet. It's all up in the air. But heavens!, please no surgery, please no!

Here's the thing. When your body continues to act up in so many unexpected ways, when your days are filled playing this never ending role of remaining cheerful and as active as the situation allows, when you must wait for another hour (and another) in some nondescript room, white furniture, white walls, facing the two colour print reproduction of a Van Gogh and an August Macke  (or a tasteful black and white photograph of empty sandy beaches), waiting for the results or that next test appointment you know you have lost your center, for a bit. For the time being.