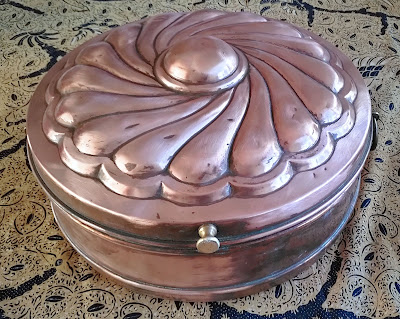 This is the last item from my grandmother's house and thus, my father's home-before-the-care-home and therefore also the last item from my childhood that I have rescued. It is my grandmother's bread bin and has been my father's for the past 25 years. As he no longer needs to store bread, he graciously let me have it. Graciously is a euphemism, it was more, what do you want that old tin for anyway.

When during my childhood, we visited my grandmother we would always have a look into that tin just in case she did have some of her soft home baked rolls in it - not often, usually it was Franconian sourdough bread. My father had the exact same bread in it over the years.

At the moment it's empty, we spent the weekend polishing 25 years of neglect from its surface and got half way to my grandmother's standards. It's solid copper, you need two hands to hold it. For the time being I am keeping it. If the price of copper soars one day when we are old and poor, we will sell it and live the life of luxury.

I should be sentimental but no. I have a considerable selection of my grandparent's Wilhelminian period wardrobes (2), bedside cabinets (2), too-short bed frames (2), sideboards with cracked marble tops (1), all in full use around the house, and what my grandmother referred to "the vertico", which I am currently attempting to sell because we replaced it with a cheap and nasty but enormously handy ikea press (which we managed to scratch while assembling). The vertico could look fabulous (for a beautiful one, not exactly like mine, click here) but currently it is showing its age and the years of use.  It always stood in the hall of my grandparent's house and held hat boxes, a basket of leather and lace gloves, a shelf of many scarves and most importantly, the fox stole. Next to it was the umbrella stand with the fancy sun umbrellas. Apart from the fox stole, I still have the hats and most of the gloves and some of the scarves and of course, the fancy umbrellas. My daughter played with all of these things as did I when I was small.

I should mention that on the back of the vertico is a stamp by the US army, declaring it as German property item 16 on loan.  The US army had confiscated my grandparent's house for several years after the war.

In other news, we had a good day of rain, we harvest plenty of fresh lettuce, rhubarb, radish and I am watching the baby apricots and pears and peaches and plums. Also, the spuds are pushing up. 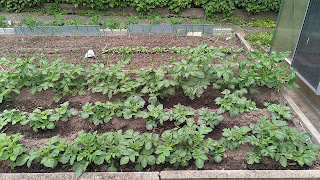 tell them the truth?

Time flies. Magnolia flowering season is over and done with for the year, we are halfway through lilac season and wisteria season is just about to go into full swing. Also, asparagus and strawberries season.

What has been on my mind most of last night and this morning was the discussion I had with a friend on how to speak with children about climate change. It wasn't a discussion as such, we spoke past each other and in the end, we were really upset about it.

Her children are small, mine is grown up. She wants them to live blissfully unaware for as long as possible. I argue to tell the truth, always, at least when asked. In our case, I don't remember when the issue first came, if it ever came up, from us, the parents or from school or the news. No idea. But I know that my child knew, was well aware of what we knew, guessed, hoped and despaired about. What I do remember is R insisting to teach her about the four wheres: where does the water that runs out of the taps come from, where does the water go to when we are done with it, where does the energy come from that provides us with electricity and heat and where is our waste ending up. He has been asking these questions in all the places we have lived, asked every class he has ever taught and keeps on asking.

This has always been the start of further activities, often her own initiatives and ideas. After all, he is a science teacher, even when a father. She did get fed up with her dad along the way, obviously, but now she is teaching her own child.

Anyway, this is why we had the discussion:

Largest scientific study of its kind finds climate anxiety affects the daily life and functioning of nearly half of children and young people surveyed globally.

The inaugural study, based on surveys with 10,000 children and young people (16-25) across 10 countries, found 75% of young respondents believe ‘the future is frightening’ - jumping to 81% of youth surveyed in Portugal and 92% in the Philippines. It found, for the first time, that climate distress and anxiety is significantly related to perceived government inaction and associated feelings of betrayal. 58% of children and young people surveyed said governments were “betraying me and/or future generations,” while 64% said their governments are not doing enough to avoid a climate catastrophe.

The full study can be read here. A short communication is here.

This is on us. This is the mess we created. And now we sit back and say it's too late, sorry?

Ok, I am getting carried away as usual.

And They All Lived Happily

All bad guys died in the end.
My kiss did make bruises better.
It was right to put lost teeth under a pillow
and that time, when you didn’t find money,
there really was a tooth-fairy holiday.

I told the truth about castor oil
as you have grown big and strong.
Broccoli, porridge, the last bit on your plate,
have been the making of you.
I really believed your Granny would get better.
I didn’t think your eyes would possibly stick
that way, but it seemed the thing to say.
That report card wasn’t worth all my giving out,
I knew your teacher had a pick against you
but how to admit that to a ten-year-old?

We weren’t made of money. I did need a break.
Our dog did go to live on a farm, for a while.
When I said I’ll think about it. I did.
You do know I was I right about that girl.
Honestly, most of the time, I told you the truth.

On the long drive back, we decided that what my father is lacking is grace and a sense of humility. I wonder if I have any. As kids we were taught to send thank you notes to relatives after they had come for a visit bringing gifts. I doubt, I'll ever get one from him. When I phoned after we returned home, he quickly noted that I had already been back for almost 24 hours.

Anyway, he lives in a pleasant place with great facilities. He spends a lot of his time looking for someone to blame for the fact that he can no longer walk. We covered my brother, my sister, and also my neglect, but as I had brought a splendid cake, he eventually settled on the surgeon (who saved his leg).

The Franconian sky was beautiful when we stopped for our al fresco lunch on the way. I had forgotten to pack mugs, so we drank the coffee straight from the flask while the skylarks were singing their hearts out. 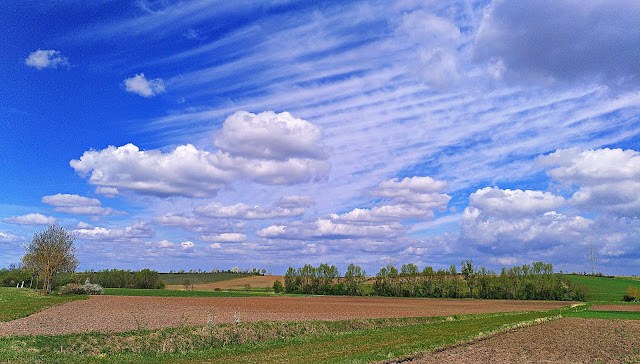 On the way home, we stopped to take in the view of the village of Castell where the Romans had started these vineyards a good while ago. The church bells were ringing as I took this picture. No skylarks. 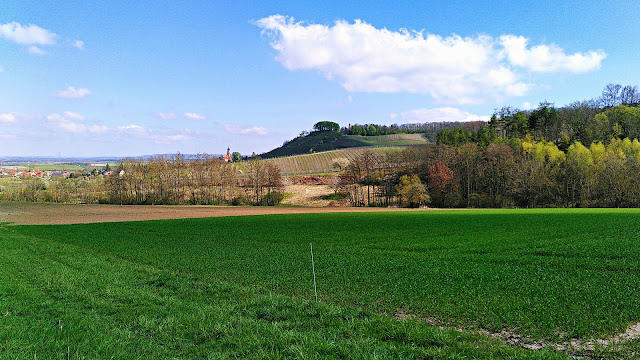 If someone were to ask me what kind of cause is sufficient to live for in dark times, the best answer I could give would be: to take responsibility for the survival of something that matters deeply. Whatever that is, your best action might then be to get it out of harm’s way, or to put yourself in harm’s way on its behalf, or anything else your sense of responsibility tells you.

I am too tired to write down what is going on in my mind, the debates and arguments between my inner voices about war and peace and how to justify stocking up on arms and history repeating or not, about the strange weather patterns and the decrease in birdsong. We have booked extremely expensive flights to a country that has yet to open its borders to visitors, it's still a while before we hope to travel but we are either sinking a ton of money or shall be the luckiest, happiest we have been for years. And so right now it has become almost unbearable to look at my far away daughter's face on my phone screen with this uncertainty.

Tomorrow though we will be on the road for four hours to visit my father. I made his cake this morning, packed the Easter chocolates and while I made a short list of what to get ready early tomorrow morning, he calls with instructions on when and how and where to park the car.

Here are some garden pictures.

The poem by Paula Meehan from my last post, with soundtrack.