The first visitors of what feels like a long string all the way up to Xmas have arrived. Joking, eating, drinking, long discussions into the night and with it a terrible tiredness, upset stomach, sore throat. I push away any feelings of loss as I drop them off at the museums, the galleries, the outdoor music events, watch their energy and their eagerness, something I used to have so abundantly. Back home I wrap myself in blankets and drink more fennel tea before I start making elaborate dinners and gear myself up for another night of laughter and talking.

I turn on the radio and I hear


Oh life, is bigger
It's bigger than you
And you are not me

and I start to cry for a short comforting moment. Autumn is here. 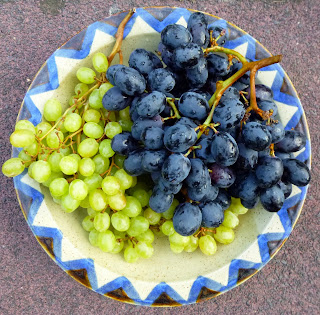 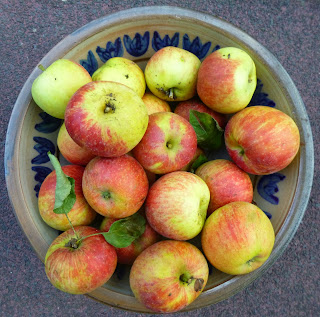 Very still air, the fine spider nets of early autumn everywhere, even on my bicycle.
Today I ate the last apricot, most likely also the last damson of the year, while the last wild peaches went into the crumble with the first blackberries. Green beans and freshly harvested carrots tonight.

I walked down to the primary school to cast my vote (general election today) and remembered this day four years ago. That time, I held onto R and my head was spinning and roaring, waves of fever making me sweat. We had no idea what was in store, we were having a laugh, look at me, all shook up with a virus (so we thought) performing her civic duties, doing her bit for democracy.

Today I just walked there and back in a couple of minutes counting my lucky stars and thanking the experts and the drugs under my breath. And everybody was politely queueing  in the school hall with the children's paintings of harvest along the wall, friendly smiles. We can take it or leave it, we are so lucky. I would be totally bankrupt by now, or dead, four years later, without the health care system we all take for granted. The cost of the drugs, all the tests, the hospital stays, the lot. These friendly smiling people, out to vote after their Sunday lunch, they all paid for it. I could get quite emotional.

in which I praise my mother - at last 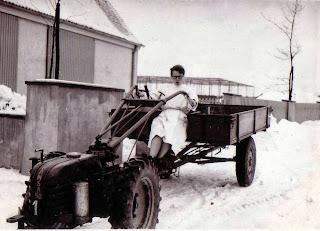 She was brave. She was determined. She was courageous. She was cunning and beautiful. She loved adventure.
She was clever, smart, intelligent. She loved science. She loved agriculture. She was an expert gardener. She could identify birds, plants, rocks, clouds, insects. And name them all in Latin. She could be a really good cook. Her yeast doughs never failed. She could sing and play the piano. She could speak four languages. She could solve the most cryptic crossword puzzles. She could knit, sew, repair shoes, wallpaper, paint, plaster, sand entire sitting room floors, chop wood, recite French poetry and make wine. And she could beat four egg whites into a stiff mound on a plate with a fork. Within a few minutes. We thought that was magic.

Some mornings start like this. I look into the bathroom mirror and I see my mother. I grin, I smile, I move my fringe from left to right and back again. I bare my teeth, turn my head this way and that and still she stares at me. How dare she.
Of the three of us, I am the one resembling her the most. I know I could play her in the movie version of her miserable life.
And then of course, I look in the mirror and I see my age. Things are getting worse. Oh theoretically, I am all for aging, for women showing their true beautiful age and all that crap. But still. I fake it mostly. I race up stairs, hurtle through the rainy forest on my bicycle, dance in my kitchen (on good days), dress up in faded jeans, suede boots, ethnic scarves, chunky silver rings, whatever it takes (and whatever I can manage) but no matter what, my mother looks on, she sits there inside my bones somewhere. I can hear her condescending little tsk tsk noises ringing through me.

Sometimes, the sounds from the new fridge remind me of the sea, the soft swishing noise of waves on smooth sand, coming and going. As a child and long before I ever actually saw the sea, one of my life goals was to live by it. I grew up in a place with flat sandy soil, forests of pine trees planted in neat rows by 18th century land owners, carp ponds and streams full of tadpoles and hot dry summers. My mother's lawn would turn yellow during the weeks of water shortages. We held competitions to see who could walk the longest on the hot soft tarmac.
But that new fridge with all its space ship looks of grey stainless steel is dodgy. It bangs about, expanding and whirring, sending shots of noise through the night making not only the cat jump. The smart young service technician laughed at me while we sat there in front of the silent fridge and he emptied the cup of coffee and shook his head again, you can always try and record it, send it by email, but frankly... and off he went.
Of course R did just that and now we are waiting for a replacement fridge. The thrills of modern living.
The iron supplements are getting me there, I think. My batteries are charging it seems but frankly... The cat was not amused when I abandoned opening the tin of cat food last Sunday morning and instead ever so delicately crashed onto the carpet. Admittedly, it was a much easier and less dramatic spell than previous ones also because I am getting quite good at it. If I may say so. There are certain swishing noises and little shots inside my head (?) that precede it.
My GP dutifully checks my pulse, my blood pressure and ties me down for one of these 3 min ECGs. But of course, all is well. I probably should get some smelling salts. Or instal CCTV in the house.
3 comments:


The last hot summer night for this year. The air is so warm and soft. Hard to believe that this is all going to be over by tomorrow afternoon - according to the forecast. I can hear the hedgehog  shuffling around in the dark.
2 comments:
Labels: music, summer

If there was one thing my parents were very good at - and they were very good at many things despite the dark memories I have been dissecting here and maybe one day I will start listing all their incredible skills and talents and actually begin to acknowledge and cherish their positive influence on my life (well, this sentence was easier than I thought but mostly theory) - they paved the straight and narrow road to academic success for their three children with a high degree of diligence. They really knew how to hold up the stereotype. Our future careers were set in stone, discussion was only possible on the minor details: doctor, lecturer, scientist, journalist (but only on a gifted scholarship) and, if all fails, maybe lawyer/judge/attorney. There was nothing unusual about this arrogant outlook in my extended family and at that time in general.
When my cousin (the oldest of our lot) had failed his university entrance exams for the second and final time, he was swiftly shoved into police training and it was never mentioned again. For many years, my mother maintained a complicated and time-consuming friendship with the owner of a local bookshop with a high standing specialising in the classics and sciences in preparation for the distant possibility of one or - godforbid - both of her daughters not obtaining sufficient grades for the appropriate chosen university courses. From time to time she would dig out the threat of sending us into the book selling trade should we prove to be not worthy of her dreams.
For an entire year, I actually believed that I was exceptionally gifted and super extra bright based on one 4-page story I had written at age 11 which so impressed my teacher (a great believer in doling out black or yellow stickers for good/bad behaviour and who graded the geometric borders he insisted had to be drawn on the outer edge of the pages in our exercise books) that he sent a note home asking for my parents to see him. My mother spent a fretful evening questioning me about possible misdemeanours and since I didn't have a clue, she was eventually convinced that I must have done something really bad. So she put on her high heels and her hoighty toighty airs only to discover that this pitiable young man thought her middle child had promise. Quite. And there my fate was sealed as far as my parents were concerned.
The teacher we got the following year got me off my high horse with a short and sharp little speech and I can still see her sitting on, yes on, the desk in front of me, one of her hands resting on my arm, and in her quiet voice readjusting my world view back to community standards: stop acting as if you were better than others, young lady, because you are not. And I shall be forever grateful for this experience.
But as far as my parents were concerned, there was no escape. Not for many years. And I did try.
And eventually I succeeded. Dramatically so.
One of the more interesting jobs I tried out was in a small factory that manufactured cardboard cylinders, from the hard stuff inside a toilet paper roll to fancy soap containers. At lunch time I would sit and wait for my hands to stop shaking from the machines. I loved the banter and the loud curses of my mostly male coworkers. The skin inside my nostrils started to bleed from the silicone that was used to soften the cardboard edges and in my final week I fainted at the glue assembly and got sacked. But by that time my parents were already way off my horizon. In fact, I had delivered the decisive blow (after opting out of a variety of first class degrees ranging from classics to psychology) when I announced that I had enrolled in teachers training, followed a couple of years later by my wish to become a midwife - which to their eminent relief was impossible at the time due to a shortage of places and my lack of practical experience (a first in Latin was unfortunately not an essential requirement).
So it was downhill all the way for me. And what a wonderful journey it has been to this day.
At my mother's funeral one of our old neighbours cried when she saw that I - then aged 41 - was in fact not the demented drug addled hippie drop-out responsible for my mother's innumerable sleepless nights and miserable days.