Let me tell you about a man I have known all my life. He is stubborn, harsh but fair in his judgements, very intelligent, unforgiving and steadfast. He loves a debate, any good argument, provided it is presented with conviction, knowledge and a decent sense of humour. He abhors smooth talkers, smart alecks, shower offers, fools pretending to be clever. He has no tolerance for dawdling. His sense of direction is excellent. He can name the constellations in the sky without hesitation and recite Homer's Iliad until you ask him to please stop it, that yes, you get his point. Then he will grin. Like a schoolboy.
If asked (but who would dare to) he would name as his principles, decency and punctuality. If asked, you would need to know and recite the five steps of the scientific method (observation, hypothesis, prediction, experiment, confirmation) without hesitating. As regards music, music is for listening, never background noise. He loves opera despite or maybe because of the fact that it puts him to sleep.
He hated the lockdown and as soon as the restrictions were lifted, he picked up all his regular habits. Lunch every weekday at the Italian restaurant, no more meals on wheels in his lonely kitchen. On Sunday a nice drive to the country inn. Shopping every Wednesday (sourdough bread, cheese, fruit, coffee and tea, dark chocolate and shortbread).
His difficulties walking, he claims, are due to being lazy and occasionally, he sets out exercise regimens. On paper only.
On his last shopping spree, with a supermarket shopping cart as his walking aid - as usual -, he found that the lift back to the underground carpark was out of order and since stairs are not an option, he decided to push the shopping cart down the spiralling downhill car ramp. The loaded shopping cart. The shopping cart that has no breaks which pulled him faster and faster down the ramp until he fell and fractured his left leg in several places.
He is stubborn, I repeat myself, I know.
He convinced the people who ran to his help that he was ok and no, there was no need to call an ambulance. With help, he made it to his car and when someone offered to drive him home, he accepted. Reluctantly. Some kind people did that, drove him home, parked his car for him, brought him indoors, unpacked his shopping and reluctantly left him there to walk back to the shopping center car park.
Alone at home, he was scared for a while. (That is my interpretation.)
His biggest fear is illness, he faints at the sight of blood (it's not his fault or weakness, it's called vasovagal syncope) and in any case, in his opinion, doctors these days are too young and uppity.
But he felt weak, physically that is, and in pain and also, what about dinner. He picked up the phone. Eventually.
He is now recovering from surgery, a metal plate in his leg, no standing or walking for at least ten weeks. After 48 hrs of confusion and disorientation, he is now furious with everybody and everything. And to demonstrate his fury, he has removed the venous access, the painkiller infusions and all the other useless stuff.
By the end of next week, he will be transferred to temporary geriatric rehabilitation in a newly built assisted living facility. We continue to stress the word temporary, although we fervently hope it will become permanent.
Currently, he is not speaking to any of us.
Last night, unable to sleep I was fighting waves of pity for him and of course, my fear of finally losing his affection and acceptance forever. By the time the birds started to sing, I realised that in my place, he would not hesitate for a second to pack me off to the next care home around the corner.

This was the week it rained heavily, some basements were flooded. Not ours. Instead we had a burst pipe in the laundry at 2 am a couple of nights ago. Thanks to my weak bladder, which forced me to get out of bed that hour and eventually awake enough to realise that, no I was not listening to a mountain water fall, we caught it early and spent only a half hour or five turning off the mains and sweeping the puddles into the drain with whatever came handy before getting back to sleep - only joking, not much sleep.
Anyway, it's all fixed now and just before I could catch up on sleep, my father fell and fractured several bones in his leg or legs and now he had surgery and we cannot visit, or only my brother can, from a distance, and he probably will not walk again, not that he has been walking properly for years anyway. But this time round, we are looking at geriatric rehabilitation supposedly starting next week and care home because, in the words of the doctor who eventually was available by phone, the old man is currently very confused. No more living the life of Riley alone and fancy free. However, and this is the sleepless bit, care homes, even the fancy ones he deserves to spend his money on, are not open to new inmates because, you guessed it, the virus. My brother is all cool and, hey it's early days but seriously, I am a mess.
The weirdest thing is that the day before this happened, earlier this week, he called me outside of our schedule (which is unusual to say the least) and said a couple of very nice things to me about me, something he never ever does. He put down the phone in his normal abrupt way but it floored me somewhat. Because my mother, on the day I called her in hospital where 12 hours earlier she had heart surgery, she was sober and sweet and called me by my secret childhood name and said a couple of very nice things to me about me, something she had not done for 40+ years. And that night, her lungs collapsed and she lost her voice for ever and her dignity and eventually, after six hard months, she died in this excruciating, terrible, inhuman way that we are all afraid could happen again despite all the Living Wills we have at the ready.
I don't know why this song is in my head, but there it is. Nothing makes sense anyway.
13 comments:

Just figuring out how to insert pictures in the new blogger thingy. A few of the things from the garden right now.
15 comments:

Hot and humid. Watching thunderstorms passing us by. We sit outside after dark and talk about people who have died, how we miss them and how happy their lives were or not.
This is a different kind of summer.


We didn't really notice very much in the way we designed towns and streets, houses, drains. Didn't really design with anything in mind but us lot. And so, the idea that "outside your house is the outside" isn't quite true. It's actually still human centric social space and can be very dangerous for other life forces.

The end of the world has already happened. The climate crisis is a sign that things have already gone drastically wrong in our, or at least the white western humans' relationships with the world. That doesn't mean it's too late. It just means that the world we thought to live in turns out not to be quite as it seemed. There's this thing that we call anthropocentrism which is the notion of putting human beings at the top of the hierarchy. The end of the world is the end of the idea that humans are the only people who have a world on this planet.

and now it rains

This is the second day of rain, on and off, nothing too heavy, but rain. What a relief. I want a whole week of it.
A young pigeon sits on one of the almond trees outside the bedroom window every morning now, cooing persistently just after sunrise. It is a very loud cooing, let me tell you, but so far I have resisted the urge to clap my hands chasing it away.
The expert called and confirmed that I should continue to work from home and that the reason why so few people with chronic autoimmune diseases have been found to get ill with the virus has nothing to do with secret immune powers but with the fact that chronically ill people know how to keep away from risks.
Anyway.
She also stressed again that this is it for me, that there are no miracle cures and also, age . . . I told her I was on top of it all and happy with my lot and smiled my zoom smile because this was a zoom
doctor's appointment. And when she logged off I cursed the screen and ran to R for comfort. Side effect.

In gardening news, here is our Robin rose (and especially for Roger to stay well). 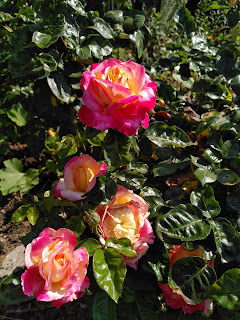 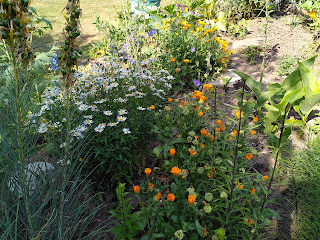 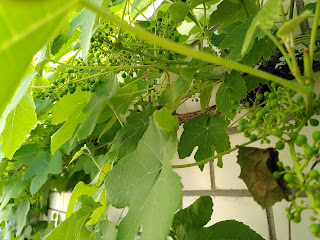 The first of many lilies. 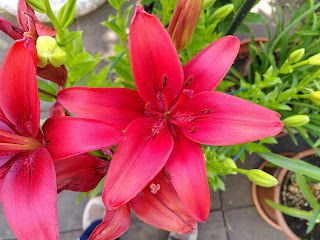 As for music on a Friday, I cannot think of anything that could lift my mood. So here is some spoken words from 1977.

The Republic of Gilead

For a long time we were going away from Gilead and then we turned around and started going back towards Gilead.

Margaret Atwood
It got summery, hot even. We sleep with our windows wide open. There's night scented stock mixed with the smell of dry lawn. I listen. To the artist in the corner house across, she is in one of her manic phases, shouting curses at the moon, banging doors and kicking something down her front path. To the engineer from Palestine, smoking on his balcony, laughing on the phone to his brother in Australia. To the river barges' chuck chuck chuck down on the river. A baby wakes up briefly in one of the terraced houses behind us.
I am thinking, unconnected night thoughts.
Of something a friend mentioned during a conversation, when does a democracy  become an autocracy. Do we even notice? What if looting is all the power you have left in a constant state of injustice? But listen, she said, people see what they want to see. And many prefer to get upset about broken shop windows rather than the real reasons people are taking to the streets. I just can't imagine that this will suddenly change. It's been way too long for that.
(We both sighed, not really involved, but.)
Earlier after dinner, watching the news, I mentioned Gilead and R laughs, you have been watching too many TV series. Checks and balances, come on. But there's this nagging thought, when does a democracy turn into an autocracy and do we even notice, watching from afar? Can democracy across the Atlantic survive with four more years of this shit, kleptocracy, nepotism, corruption? What do I know.
13 comments:
Newer Posts Older Posts Home
Subscribe to: Posts (Atom)