To our east, not too far away to ignore, a mad man intends to reinvent himself as Peter the Great, at least in terms of violent expansion of his reign. A distant relative with Finnish family ties reports on how their holiday home near the Russian border has been turned into a supply center for all things needed in case of you know what. And it's not only tins of food in the storage.

To our west, across the ocean, Margaret Atwood's Gilead is rising. I listened to a lengthy radio feature this morning detailing how social media, cell phone apps, bluetooth captured travel patterns (google maps, satnav etc.) and DNA stored by ancestry etc. websites can and most likely will be used to track down women seeking abortion, related health care and, eventually, birth control. We have watched our crime series and we all know that a person's DNA can be detected in the tiniest drop of blood, speck of tissue, evaporated sweat salts. And maybe we all should know that maternal DNA (mitochondrial DNA) is found in males and females and can be traced through generations. Think of these massive DNA data banks and how easy it will be to find a woman who left that tiny shred of tissue. All you need is a distant relative.

Many years ago, there was outrage when a traveller from Ireland was arrested upon entry to the US based on what immigration had found on their amazon order lists - and that was at a time when amazon was mainly trading in books. Under his eye*.

*In Margaret Atwood's The Handmaid's Tale, this phrase is the prescribed greeting, meaning that someone—a Guardian, a Commander, a fellow Handmaid, God—is always watching.

While, far away to the southeast, across landmasses and oceans, a new public holiday has been celebrated for the first time this week in June. It's called Matariki., which is the Māori name used to describe the star cluster also known as Pleiades. (Māori are the indigenous Polynesian people of mainland New Zealand.) Before sunrise on and around this day during what is New Zealand's winter, the cluster becomes visible as a faint sparkle of tiny dots on the northeastern horizon.

Matariki is aligned with the maramataka, an ancient lunar calendar which synchronises the daily activities of people with the natural world, moon, sun, stars and planets. It uses cycles and phases instead of counting days, weeks and months.

So here we have it: war to the east, a new taliban regime to the west and celebration of our place in the universe to the southeast.

All on the one pale blue dot.

In no particular order, this happened in the last three weeks:

A short but massive heatwave.

For the second or third or possibly tenth time in my life, I had a dose of vestibular neuritis, aka inflammation of the balance nerve. It's all part and parcel of the weird autoimmune disease I have acquired ages ago. Basically, I acted and possibly looked like a drunken sailor in a heavy storm. Actually, no, make that a tourist, a non-sea worthy tourist, incl. some unpleasant emptying of stomach contents. It's exhausting but the euphoria once I was beginning to recover was probably not unlike what seasick tourists experience when reaching the shore. I am not quite there yet, small steps etc. I spent long hours listening to Louise Erdrich reading in her gentle voice The Night Watchman.

On Wednesday, the covid app informed me that I had spent an extended period of time in close contact with at least one covid-positive person two days earlier and that for the next ten days I should test daily, watch for symptoms and isolate. The close contact was at least one person at the ENT surgery, maybe even the doctor who examined me on Monday.  So far, I have no symptoms and all of the lateral flow tests have been negative. But apparently, I can still pass on viral load, i.e. be infectious, although I doubt that. Anyway, this new variant is a tricky fellow.

For the last three days now I can walk without having to hold R's arm, I keep my food in the proper place and this evening, we even cycled a short distance - in splendid isolation - but afterwards, I felt like a train had run me over.

The garden is a delight. 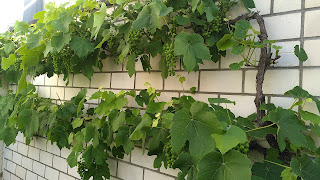 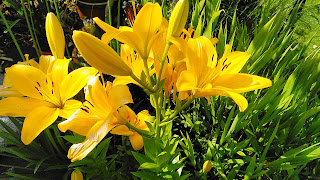 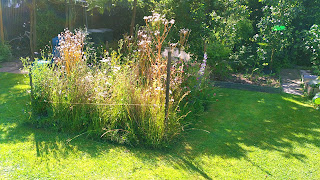