There it is, spring. Currently, we are enjoying lilac week. A flowering lilac in every garden here. It's a German thing. Which is why R doesn't like it and has been sabotaging - by constant replanting - the gnarled old one we inherited when we bought the house back when we were younger. The man who gardens here has a strict hierarchy and on top are plants that produce food not feasts.

This is today's view for those who arrive via the back lane on bicycle. I left my bicycle there for show. 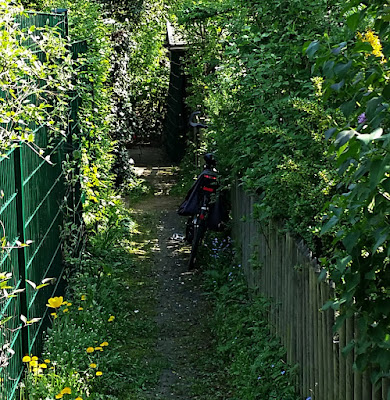 My energy levels are shitty and I try not to think of the woman I used to be, the one who cycled daily come rain or shine. Right now, I mainly concentrate on making it through half a day at work and the tiniest, shortest cycle if I'm lucky.

My brain is equally shitty, tired and certain thoughts are going round and round where I wish they would not. I am now on five different meds throughout the day. According to the experts, this has become necessary in order to reduce too many risks and therefore will keep me alive.
Seriously. All these new versions of being alive, I am learning. Must polish my appreciation skills and all that stuff about acceptance. Taking things for granted is overrated.

So, what else happens.
Steve's post on the collecting impulse brought back memories of stuffing the bib pocket of my overalls, getting water into my wellies trying to catch tadpoles, trapping maybugs, peeling flattened lizards off the road. And then I found this image online: 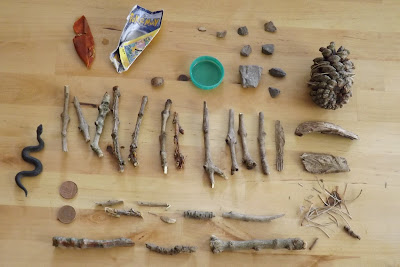 In which we see what writer Katie Munnik found in her 4-yr old's winter coat before washing. Essentials, basically.

And BTW wasn't that congress speech by Macron refreshing.
Whereas on a much more somber note, this did not lift my spirits but read I had to:

Without hope, goes the truism, we will give up. And yet optimism about the future is wishful thinking, says Hillman. He believes that accepting that our civilisation is doomed could make humanity rather like an individual who recognises he is terminally ill. Such people rarely go on a disastrous binge; instead, they do all they can to prolong their lives.
Can civilisation prolong its life until the end of this century? “It depends on what we are prepared to do.” He fears it will be a long time before we take proportionate action to stop climatic calamity. “Standing in the way is capitalism. Can you imagine the global airline industry being dismantled when hundreds of new runways are being built right now all over the world? It’s almost as if we’re deliberately attempting to defy nature. We’re doing the reverse of what we should be doing, with everybody’s silent acquiescence, and nobody’s batting an eyelid.”

No matter where I go these days, people talk about war and not in a detached way. Even my Heidi Klum colleague, who has a somewhat delicate selection of topics of interests, is very concerned about a real war that could even have an effect on our lives. In a way, that is.
Also, the news are of blood rain coming, which sounds almost as bad but actually only involves large amounts of reddish Sahara sands that have been detected in higher atmospheric clouds above Europe. Should it rain, chances are these sands will come down with it. Dramatic.

When we lived in paradise with its eternally tropical climate and our time of departure and inevitable return to damp and rainy Dublin was approaching, I tried to prepare my daughter to things to come, incl. seasons.
There she sat on the sagging hammock that provided a handy bridge for the ants to wander from one mango tree to the other, sucking on a bilimbi ot maybe a green mango dipped in salt as she listened with wonder to my tales of spring with snowdrops and daffodils and strawberries and I must admit that I made it sound rather lovely, one happening after the other in a long string of delights, like chapters of a fairy tale. I left out the other seasons as they can be tricky in Ireland. She laughed at it as one laughs at a good joke and skipped off to vist the women singing and washing clothes down by the river. 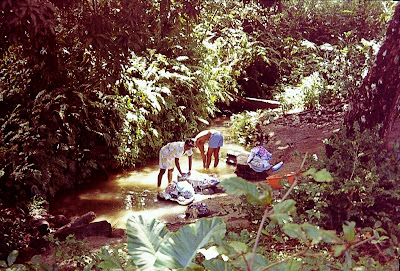 So no, I don't think I made an impression one way or another. We returned to a mild and wet autumn and by the time there was real snow in February, life had caught up with us in so many unexpected ways that winter was actually enjoyable for the (one and only) day of chaos and snowball fights.

This spring feels different, everything seems to be happening late and all at once while I am still picking up withered blossoms of the xmas cactuses in my office.
Outside, magnolia reigns supreme. And as every year, R tells me in his teacher voice that magnolia are the dinosaurs of flowering plants, 50+ million years old and so on.
This one is about 150 years old, whenever I walk past it I take a bow. 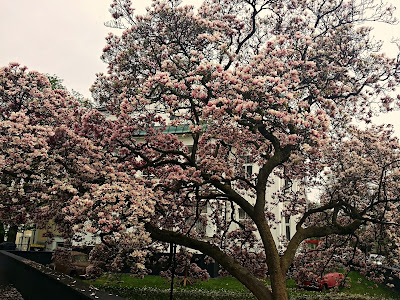 Yesterday, my drug regimen was reshuffled and I sat there all timid and well-behaved listening to The Lecture on rest and paying attention to symptoms. On the way home I spontaneously decided on a short detour to the DIY store and totally out of the blue decided to hire a high-pressure cleaner for the weekened. As a result, for most of today, I have been cleaning the patio stones. Very soothing, let me tell you, and with the added surprise of rediscovering the actual terracotta colour.
My arms, however, are a shaking mess and I cannot lift my cup of tea. As for tomorrow, ah feck it, one day at a time etc.

We must be willing to let go of the life we have planned, so as to have the life that is waiting for us.

This may be the last day for the winter coat for a while, I am ready to chuck it deep into the darkerst corner of the wardrobe. This morning, I cleared the ice from the windscreen in the sharpest sunlight full of promises. Warmth, birds, colours.
The fog in my head and my bones is lifting, slowly. Getting ready for spring.

I am already overdoing it. Trying to calm the niggling thoughts that this exhaustion may stay with me - as predicted. Yesterday, I cycled furiously, yes furiously, for half an hour against the cold wind and pretended to feel invigorated for a while. In my office, I worked hard at being efficient and laughed at the right moments. Nobody noticed.
At night, angry dreams woke me up. At one point, I watched my feet changing shape, toes fusing into thick round swellings, nails curling upwards as if to tell me that my walking days are over.