so much bigger than us


watch this on the biggest screen you have
6 comments:

When the accumulation of wealth is no longer of high social importance, there will be great changes in the code of morals. We shall be able to rid ourselves of many of the pseudo-moral principles which have hag-ridden us for two hundred years, by which we have exalted some of the most distasteful of human qualities into the position of the highest virtues. We shall be able to afford to dare to assess the money-motive at its true value. The love of money as a possession—as distinguished from the love of money as a means to the enjoyments and realities of life—will be recognized for what it is, a somewhat disgusting morbidity, one of those semi-criminal, semi-pathological propensities which one hands over with a shudder to the specialists in mental disease.

Forever chasing that elusive present moment, while instead I am dwelling on the past and fearing the future. I can do that really well, multitasking etc.
In between sunny spells it has been raining hard, like some angry god throwing sharp pebbles down by the handful here and there.
Visitors are on their way, their train is on time, beds are ready and R is cooking. This will be a first for me, entertaining with vertigo. Or very early good nights. I often think of the people I know who suffer from  migraines and how much we have in common. Right now, it is the fifth attack in three months and it won't be the last.
There is no other word for it, I feel under attack and yet my body is doing it all by herself. After the last reprimand from the expert (be proactive, never mind prescription rules and side effects) and begging my bones to please remain strong, I am now helping myself to generous amounts of cortisone - I am not stupid, there is a protocol,  I will do this only for four days.

Last night, R was out having fun with friends who asked about me and he described me as social recluse. When he told me, long after midnight, I got really angry a bit upset and ready to protest. But yes, that's what has become of me. This disease has too many surprises to pretend it doesn't change the way I live. And it is me who sends R out into the world on a Friday night. And it is me who waits for him to come back with funny stories and pictures and the smell of drink and laughter on his breath when he kisses me.

So what. Did I mention that he is cooking right now? Something with porcini mushrooms and Spanish cheese. Last night I finished book 17 (Single & Single) of my annual challenge of (re-)reading all John le Carré novels in chronological order. Seven to go, plus his autobiography. Don't let it be known that life isn't good here.

Earlier, my father called and made a most generous offer. I tried in vain to refuse (so far) and I am hoping he'll forget. It involves money, obviously, and in my dysfunctional family, this could develop into (legal) warfare.  He has a point,  but one that will never be accepted in court.
Also, my sister has stopped communicating with him or maybe he did. Both claim to be 'immensely' relieved with this dreadful situation, while I can feel their hearts breaking.
I wish that my heart was cold and hard, that they leave me out of it, that they let me mediate (never!).
But most of all, I wish we could stop dwelling on the past, fearing the future. That we could all find the elusive present moment where nothing else matters.

Presently, I am going through another period of  tsundoku, which is Japanese for "the act of leaving a book unread after buying it, typically piling it up together with other such unread books".

Of course, I have my reasons excuses, which are mainly the four horsemen of the bookalypse: fb, twitter, instagram and blogs. Plus obsessively reading online news. (I am so with it, I am almost ahead of it all.)

My parents would not approve. And as a balancing measure, just in case my mother, in whatever shape or form she is currently haunting me, looks in and also to be prepared for my father's sharp comments that this in-ter-net (a dirty word in his vocabulary) surely spells the end of civilization, I have started to read three short aphorisms by Georg Christoph Lichtenberg (1742 -1799) every morning.

My noble intention is to let them settle in my mind for greater clarity during the day. Thus, making me even more clever and to add wit to my conversations with society as a whole. I am kidding. There isn't a cat left in the neighbourhood I could talk to these days. Also, I am on triple antibiotics at the moment which make me nauseous and in dire need of distraction. Plus, vertigo is back, surprise, surprise, and I shouldn't really go about crashing into furniture or falling down the stairs.

My source is an actual - slim - book, albeit made of extremely lightweight paper, I inherited from my grandfather, complete with his faint penciled notes on the margins (mostly exclamation marks).

This is today's ration: "Our planet is not fragile at its own time scale, and we, pitiful latecomers in the last microsecond of our planetary year, are stewards of nothing in the long run."
Stephen Jay Gould


We took a break and packed the bicycles in the car and drove west to the flat land to look out at the sea. It was reassuring. On very sunny days, we cycled on top of the dikes and on bumpy cobble-stone streets through villages where every front window is washed and sparkling. A clean front window without curtains, my Dutch friends explain to me,  is a message to the world that we have nothing to hide, that our souls are pure.
We watched the sun set every evening in absolute perfection, and we felt very small and insignificant.

We ate stroopwafels sitting on the jetty with out feet dangling, watching the sailboats. I forgot to put on sunscreen. I forgot the lab report that was waiting for me on the kitchen table back home. 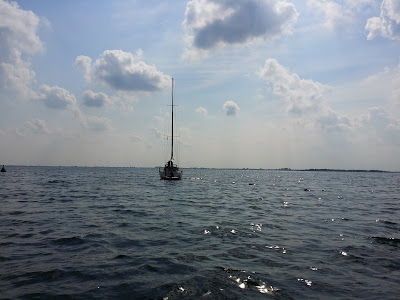 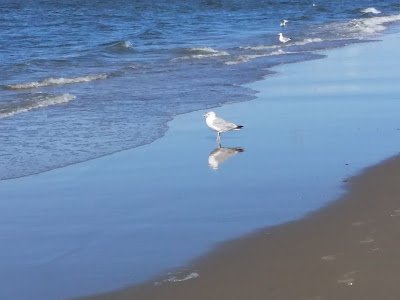 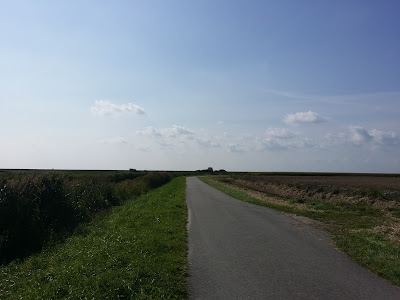