everything ends up somewhere

In 2000, the British artist Michael Landy spent twelve months cataloging everything he owned, from handwritten notes to a single PG Tips tea bag on a string. The final inventory included 7,227 items, weighing a total of 5.75 metric tons. For two weeks in February 2001, Landy and a team of assistants systematically destroyed every single one of his possessions as a performance art piece, Break Down. His furniture was smashed, his passport and birth certificate shredded. A mechanic dismantled his car. Even old artwork and photographs weren’t spared. Everything he owned was pulped or granulated and sent to a landfill site in Essex. (. . .) The most difficult thing to destroy was a sheepskin coat that had belonged to his father, which he saved until the very end. (. . .) “destroyed” is really just a euphemism. The remains of Landy’s things ended in landfill, to begin a new, patient existence among the 16 million metric tons of household waste that enters UK landfill every year.

“Away” is a lie, the kind that lets us dream of lives cleansed of possessions. (. . .) At the end of the performance, Landy was a kind of modern miracle: a man entirely untethered from material possessions, lifted free of consumer society. But it didn’t last. Before he left the building, someone handed him a record to restart his collection. He had been the owner of precisely nothing for about ten minutes.

I find this story somewhat moving, the effort, the futility. The stuff people do to find meaning, to learn, to forget. To occupy their time, maybe.

Today, I've spent a good deal of my time looking at holiday accommodation in Singapore, chasing a dream. And I have not checked in with dr google for a definite diagnosis why my lower legs go numb. Not both, just one at a time, not always, just every so often. Instead I'll wait the 13 more days for the medical appointment with the expert, shaking with fearful anticipation.

Can't all be bad, I did dance for a bit today. With abandon as the saying goes.

And we looked at the sunset from the good spot up high. 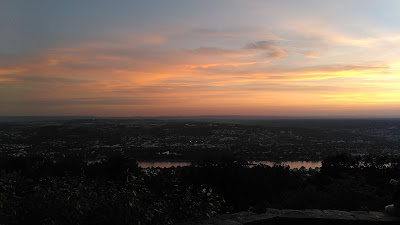 The garden is gone to seed. 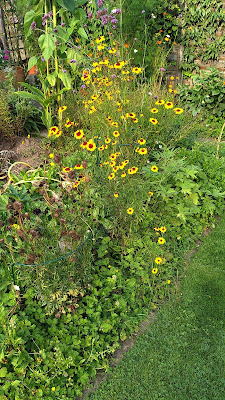 n. a wistful omen of the first sign of autumn—a subtle coolness in the shadows, a rustling of dead leaves abandoned on the sidewalk, or a long skein of geese sweeping over your head like the second hand of a clock.

(from The Dictionary of Obscure Sorrows)

The first week of my September holiday is ending.  We are not cycling along the seaside in Holland or Belgium or even Denmark and not somewhere in the Alps swimming in an ice cold lake because, virus. We are also not on our way to meet my father and 10+ other people for lunch tomorrow for the same reason. Possibly also because he said I was being hysterical and would not hear anything about me being on immune suppressing medication and hence not prepared to share lunch indoors with people, aka my cousin and his crowd, who refuse to get vaccinated. I may have added that I find it irresponsible of said cousin to actually come and have lunch indoors with his geriatric grandfather. I swear I said nothing like, how come he only always tuns up when there's a free lunch. Anyway, my father concluded in his sharp snappy voice, you sound perfectly healthy to me and put down the phone. Despite initially feeling - as expected - once more hugely rejected and misunderstood, but what else is new here, I am actually relieved.

So instead, I have been sleeping A LOT, indoors and outdoors on the lounge chair, in between reading and watching R digging and harvesting and composting and - drumroll! - preparing the place and his mental stage for the imminent removal of the oil tank, burner and all traces of fossil fuel from this house. He is beyond excitement. He has also started full blown war with the field mice eating his seedlings and although I repeatedly and so far patiently explained the futility of his actions has so far killed five specimen. I fear that I may become somewhat more involved for the sake of the mice.

The sad news is that I had to find a new GP as the lovely one I have been going steady with for the last five years has retired. The new one ticks all the boxes as in young, well trained, friendly staff, 10 min cycle away and so on but we have a way to go. So far, she refreshed my pneumo vaccine, filed away the embarrassingly large stack of lab reports and referrals from the various experts I had accumulated and when I asked whether I could or should halve the beta blocker dosage because it's now almost six years since I was in intensive care with the afib, she said - and I kid you not - "never change a winning team". Before falling asleep, I briefly debated with my inner voices the use of a soccer witticism in connection with my health issues and whether I can live with it. Fittingly, that night the afib came back in a big way as if to tell me to stop being so fucking finicky.

What else is new? I made this crumble with the apples and blackberries growing at the back of the garden and R started some wine from the small amount of this year's grape harvest.

So I am trying to hold it together here, sticking with the winning team but, hell, it's hard work. And that's not even wasting a thought on the virus and the upcoming general election and all the soul crushing frightening mess we are creating ion the planet.

We should keep our feet on the ground to signify that nothing is beneath us, but we should also lift up our eyes to say nothing is beyond us.