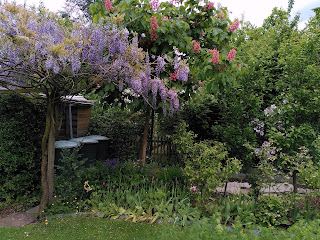 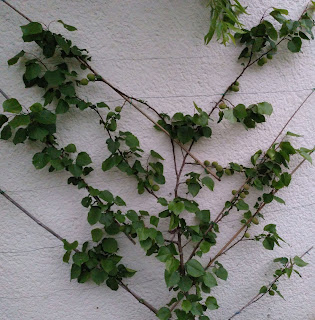 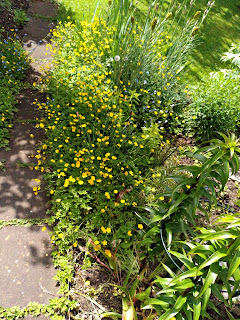 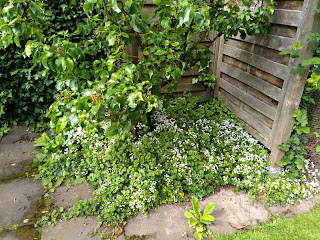 lots of woodruff under the little pear tree, should make some May wine 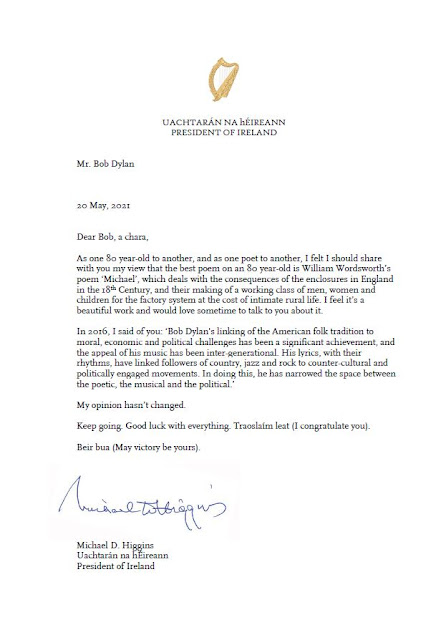 and this is the birthday letter from Michael D. Higgins, president of Ireland (and published poet) to Bob Dylan

We are heading into the long Whit weekend, or Pentecost for some, with Monday a holy holiday. We have many holy days here in agnostic Germany, especially now, in May and June. Just past, there was Ascension Thursday, now Whit Monday coming up and next week Corpus Christi. On these days, everything is shut. If you forgot to buy food, you can try the petrol station and maybe find some old stuff deep down in your freezer. I remember my surprise when I first came to live in catholic Ireland where these days are not observed. Also, the amazed reactions when I explained about holy days in Germany. What, they exclaimed, in a country that has divorce and protestant churches?

Anyway, we have been informed that this year the local Corpus Christy procession will take place, albeit with distancing, which means it will be twice as long, snaking past our house, white and yellow flags and the rosary through a megaphone. One year, a long time ago, we were hosting a small group of African scientists attending an international conference (there is a private network in our city supporting people/countries who cannot afford the hotel fees) and they loved the display of this strange and mysterious local custom.

So for today, a few snippets only:

This excerpt is slightly edited and translated by me from a podcast script by Christian Drosten, virologist who identified the first SARS-associated coronavirus in 2003 and who developed the diagnostic test (PCR) used world wide.

Talking about herd immunity is pretty irrelevant, because everyone will become immune. 100 per cent, not 70 or 80 per cent, but 100 per cent in the population will inevitably become immune in, give or take, a year and a half. Either through vaccination or through natural infection. This virus will become endemic, it will not go away. Anyone who actively decides against getting vaccinated now will inevitably become infected. There is nothing you can do about it. Because, of course, the lockdown and distancing and masking measures will be cut back at some point. Then the virus will circulate in the population. It will circulate in the throats of people who have been vaccinated, who will not even notice that they are carrying the virus. It will circulate, of course, in the throats of children under twelve who cannot be vaccinated at the moment. The virus will spread in an undetected way under a blanket of immune protection. Then it will hit people who are not immunised by vaccination, who are fully susceptible. Those who are then infected, of course, may possibly end up in intensive care and many will die.

After the summer and in the autumn, people will have the opportunity to reconsider and say: Do I want to be vaccinated instead of getting infected naturally? If they don't get vaccinated, then of course they will get infected. This has nothing to do with political debates or compulsory vaccination or any kind of ethical debate. It is a free decision that people ultimately make. But I believe that those who actively decide against vaccination must know that they are also actively deciding in favour of natural infection.

And this music, oh how good is that! I have been listening to it for the last couple of days, the entire album is on youtube. There is a story behind it, click here for more. This is my favourite track.

and this is also my favourite track
12 comments:

In illness .... We float with the sticks on the stream, helter-skelter with the dead leaves on the lawn, irresponsible and disinterested and able, perhaps for the first time in years, to look round, to look up--to look, for example, at the sky.

If it were not for my never ending monotonous litany of symptoms, which with predictable regularity is calling on me, my patience, my stamina, my stoic self - where would I be these days? Theoretically I am all for remaining stoic, after all it supposedly involves an indifference to high flying emotions, but in reality, that has never been my strong point, so it is hard work. Asking me to recollect myself - but as what? To reorient - but towards where?

Also, I consider one of my major achievements that - after much tossing and turning and chaotic thinking in the early, early hours - I finally allow myself to just lie there and Observe What Happens Next. I feel very Zen writing this down. Mostly, I am so tired by then that I fall asleep but it's the thought that counts, surely.

So yes, I have now managed the art of stepping back, mentally (having long since stepped back physically) from the ordinary claims of the world. But somehow, I still find myself walking on eggshells waiting for things to get worse, especially with the novelty set of side effects a new medication brings, the way it messes with the nerves along my legs and the - as yet - moderate hair loss. I am not so sure whether I am ready to swap my thankfully thick hair and the full sensory faculties of my legs for - what? I quite forget. Maybe a longer life?

When the first medical expert mentioned to me that my life expectancy will be somewhat reduced, I cried while waiting for R to pick me up. That expert was a piece of shit, really, because he urged me to get on the liver transplant list as, in his words, my liver had five years, max. But my daughter hasn't even finished school, I replied. (He was wrong. My liver recovered, while other bits have since packed it in. I don't think about it much.)

On Sunday, during my duty phone call my father in his nonchalant way mentioned that he has accepted to be locked up in this care home until his death. I almost replied, maybe that won't be long now. But I held my tongue. Whereas he felt it appropriate to add, you with all your health issues and medications, you'll probably die before me anyway. I politely changed the subject.

It is disappointingly cold outside, so that on these long bright evenings, we sit wrapped in blankets and watch the rain showers blowing across the lawn. Everything is lush and soggy and colourful to look at, the garden is enough. Almost.

We are at the end of the tulip season and just before the roses, with lilac everywhere. This is what I picked yesterday walking through the garden, one blossom each, excluding anything that will become a fruit and flowers on trees, because: too high. 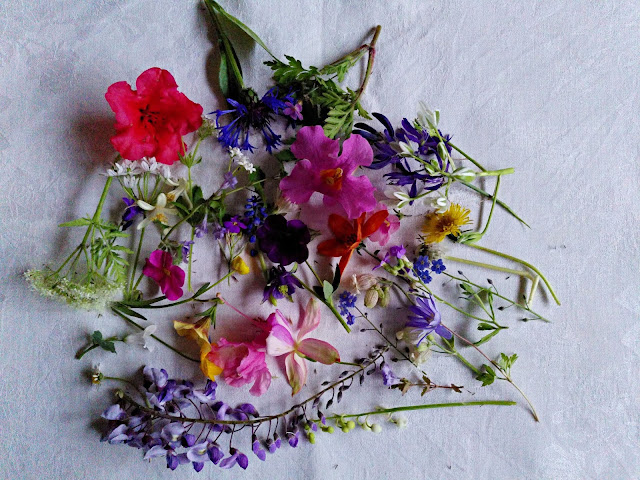 Cannot remember where I read this, but this week has served as an example that any idiot can weather a crisis, it’s the day-to-day living that wears you out.

I could list now that this week, I washed the windows, baked bread (of the no-knead variety) twice and apple crumble once,  roasted miso glazed aubergines, cooked asparagus risotto, made jam with the last frozen strawberries from last year, finished the latest knitting project (and now I am at a bit of a loss), cycled 64 km in total, read two novels*, ate the first juice apricots from France, went to the physiotherapist twice to unclench my aching joints, drank gallons of tea and spent 25 hours being gainfully employed.

Worn out doesn't quite cover it. But still:

*We run the tides, by Vendeal Vida and My phantoms, by Gwendoline Riley

There are more things … likely to frighten us than there are to crush us; we suffer more often in imagination than in reality.

So, I am amazed that I have arrived at another Saturday in one piece and upright, that I did loads of work, clearing my inbox, fat and full last Monday morning, step by step or rather manuscript by manuscript before falling asleep before dinner last night.

The garden is all tulips still, what usually is a week at most before they collapse under the sun, has stretched for another and another cold week, there's also lilac everywhere and a tiny show of wisteria, but for the rest, we are weeks behind or maybe we used to be weeks ahead for years. It will, no doubt, all explode soon enough, the garden blossoms I mean. My baby apricots are coming along nicely, at least that.

This is a picture I took a few years ago, but the same tulips are flowering right now. 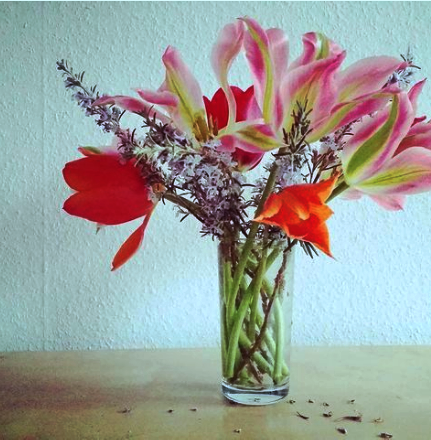 I have been immersed in Jack by Marilynne Robinson, forcing myself to read slowly because, well to me it's a gem. And this morning I actually did a google search for Jack Boughton, hoping against hope to find a hidden picture. In the movie version of the book, which I have directed in my mind, he is played by Sam Shepard, a disheveled Sam Shepard and Della is played by, maybe, Lupita Nyong'o. Only their age doesn't match and I do have a problem with movies where older male actors are paired with much younger female ones. So I had to develop a kind of time shift in my mind, bringing a younger Sam Shepard back to life and so on.

Reading Marilynne Robinson is a unique experience, as I am not the slightest bit religious and this book, just as her novels Gilead and Home and Lila, is at times a sermon, a prayer, a hymn book, albeit with an observed distance, nothing preachy. Often, I have to think of the Dutch Calvinist outlook that to this day is reflected by the uncurtained large and sparkling clean front windows of Dutch houses, allowing anybody to have a good look inside, as a metaphor for the honest soul that has nothing to hide.

I read out this bit to R (and he, the good catholic boy he once was, got a bit of a fright, asking, what have I done wrong now?):

You are not good for your own sake. That probably isn't even possible. You are good as a courtesy to everyone around you.

Other than that, I work hard ignoring the ongoing low level aches and super high level exhaustion. Had a nice chat with our GP about ageing and chronic illness. I told her, it first happened so gradually, without me noticing until one day when I could not remember what being healthy felt like. And how I should have known this was going to happen, should have paid attention. But she just shook her head and said, nothing stays the same for anybody.