Let's start with an image from the garden. It's dated, more than a week old and we all know how spring races on.  Anyway, these beauties (wild tulips) are still flowering all over the place. 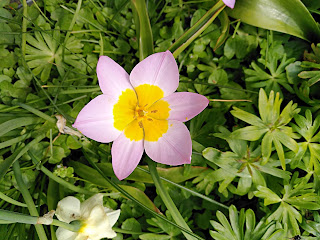 I am having a rough old time. What with side effects of this new biological while waiting for it to kick in to show me its promised glorious powers. (I am beginning to have doubts. My inner hypochondriac is having a field day.) But just for the record, four weeks of cortisone therapy, starting high and tapering down to almost nothing, have not only revealed glimpses of my former self - free of all the aches and filled with energy, I was in best form - but also confirmed once again the inflammatory nature of this autoimmune disease. Isn't it a pity that cortisone is such a toxic agent. I could get addicted to it. But for now and following doctor's orders, it's almost gone, I am down to 2.5 mg for another couple of days and the old stiff and tired woman has come shuffling back into my life. And that's not even mentioning the gruesome inflammatory bowel scenario.

Wisely , I postponed my appointment with HR until last week. Any day earlier and I would have thrown any offers of earlier retirement out the window. Me? I would have laughed, look at me, I am in great shape.

Whereas now, I am stuck with the same old same old. Should I, will I, can I, etc. and on days like today, how much longer, and even louder: when?

. . . the morality of illness is about seeking to do the right thing, but no single right thing is usually available. Thus 'rising to the occasion' involves living with a combination of uncertainty about what is being done and necessity to do something, since even inaction is a form of doing. The morality of illness means responding to the question: "How do I become the sort of person who has to live with a decision that I never should have had to make?"

Anyway, I have a bit of a time to think and throw the dice. A few more consultations with experts.

All this is history now.

This week, we finalised my father's exit from his childhood home. It was a complicated affair.

This was the house where he grew up in from when he was five years old. After he had walked away from his marriage and with the golden handshake he had received at the end of his career, he moved back there. He lived there with my grandmother for a while, but only until he got her safely removed to a care facility. It also was a complicated affair.

He sold the house about twenty years ago securing what in English is called usufruct, a legal right given by an owner to someone who is not the owner, to use the owner's property for a certain period, usually for the remainder of that person's life. This was in fact not at all a complicated affair. Usufruct has been applied since the Middle Ages, especially in rural Germany.

Here he is, the kid on the right watching his uncles and cousins digging the basement foundations. 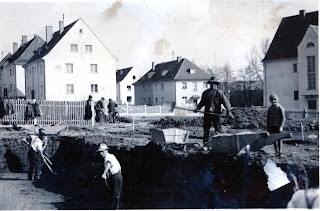 And this is what it looked like after completion in front. 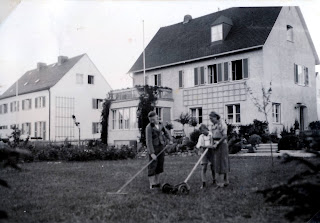 And here I am (on the right) with my sister (2nd from left) and cousins on an Easter Sunday visit. 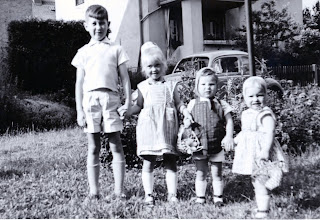 This is what his sitting room looked like before he moved to the care home last summer.  The woman in the painting is my great grandmother. 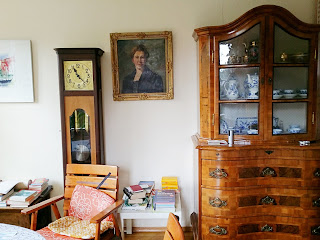 . . . and here he is, in the same room, maybe six/seven years old, my sister sold the sideboard today. He is with his first model railway on xmas. All through his and our childhood the model railway was set up for the holidays, with many new additions, which meant that he and we spent a good deal of the xmas holidays gluing together models of this and that and by the time I was about 10 years old, it had become an elaborate affair with tunnels and mountains, churches, cities, motorways, light and sound and all the trimmings you can imagine. It lives now in its own room in my oldest nephew's house. 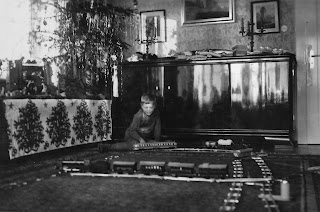 As of today, no frosty nights and the two days of snow storms have not fazed the fruit trees!

The tiny apricots are growing, the greengage and mirabelle plum trees are still flowering with abandon, the rhubarb has shot up and the borders are a colourful tulip, forget-me-knot and grape hyacinth wonderland. The method of frost protection Ellen suggested (spraying the trees with water) is used here by the big commercial orchards and I briefly wondered whether we should get out the sprinkler. I also contemplated the heat methods used by the vine growers in France, which are basically huge candles lit between the rows. 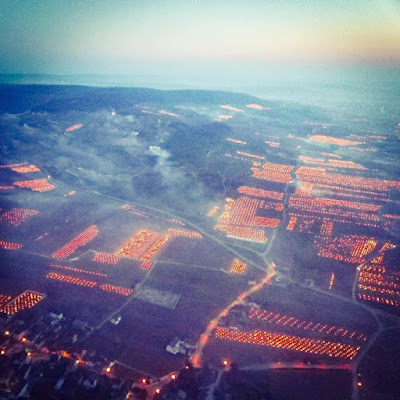 But in the end, we have been lucky and keep our fingers crossed for the next couple of nights and then we should be all clear.

It's a year now since I stopped going to work every day, a year since I have been inside a super market, a restaurant, or anywhere indoors in one room with people. Not a single coffee-to-go cup or take-out sandwich. Not a single trip anywhere except for necessary appointments. Seriously, I don't miss any of it. We have developed ways and means to stay in touch with friends and family and that's the only aspect I will welcome back.

I think the pandemic invites me to take stock. It opens up the opportunity for me to carefully sift through our way of life, piece by piece - and to consider what can go and what we will need in the future. I am making plans. My physical energy is limited and I have found this to be a bonus, strange as it may seem. I have not grown tired of cycling along the same river, through the same forest, around the same suburb.

While many just think about how they want to get back to what was their (seemingly) "normal" before the pandemic, and other are still pretending that nothing really is different, I am convinced that we are at a crossroads in our coexistence with other creatures, and I am certain that most of us feel like that, consciously or unconsciously, in fully formed thoughts or vague notions. And I mean our way of inhabiting this earth as living beings and the way we are sharing it with each other.

This pandemic will not be the last, there will be more in the future. Zoonoses are diseases that jump from animals to humans and some animals carry viruses to which we are not immune. Some of the reasons why this happens are deforestation and factory farming. Both are man-made. The future pandemics will be man-made. There is much to think about, much to get involved in.

I can already hear the whispers and shouts about how we humans cannot help ourselves, how we are going to hell anyway because we are unable to do anything about anything anyway and so on. We have been fed this line of doomsday thinking with climate change. And to an extent, I agree. But I am also deeply hopeful and for that, I don't need all of humanity to understand what is going on and what needs to be done. As with herd immunity, all it takes is a certain percentage, let the rest continue to moan and blame human inabilities.

It's a handy narrative, doomism, it goes hand in hand with science denial, as explained here: 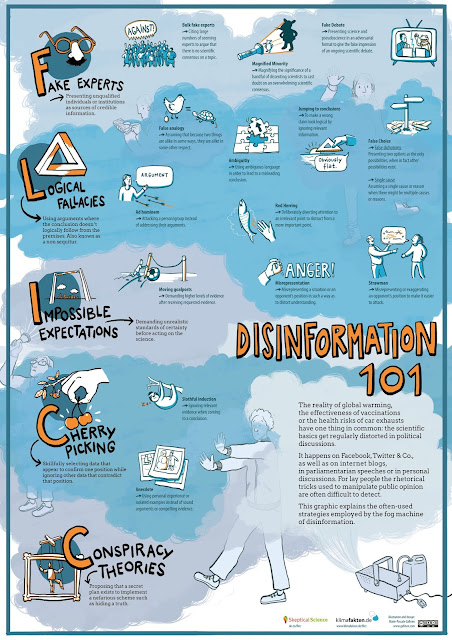 I realise, too, how so much easier this is, if I give up/in, at least I can get on with my comfortable life for the next decade or so before I kick the bucket. And whenever I have a sleepless night about my grandchild's future, I can pull out the handy arguments about humanity being unable and that it's all downhill anyway and that there is nothing I can do.

This from a recent interview with climatologist Michael Mann (to read all of it click here):

Any time you are told a problem is your fault because you are not behaving responsibly, there is a good chance that you are being deflected from systemic solutions and policies. Blaming the individual is a tried and trusted playbook that we have seen in the past with other industries. In the 1970s, Coca Cola and the beverage industry did this very effectively to convince us we don’t need regulations on waste disposal . . .  look at (the fossil fuel industry), which gave us the world’s first individual carbon footprint calculator. Why did they do that? Because (they) wanted us looking at our carbon footprint not theirs.

Doom-mongering has overtaken denial as a threat and as a tactic. . . . if people believe there is nothing you can do, they are led down a path of disengagement. They unwittingly do the bidding of fossil fuel interests by giving up.

But “too late” narratives are invariably based on a misunderstanding of science. Many of the prominent doomist narratives - . . . - can be traced back to a false notion that an Arctic methane bomb will cause runaway warming and extinguish all life on earth within 10 years. This is completely wrong. There is no science to support that.

Good people fall victim to doomism. I do too sometimes. It can be enabling and empowering as long as you don’t get stuck there.

Here we are, in fear of the coming polar vortex, hoping that the flowering fruit trees will be able to handle maybe/hopefully just the one very cold night. I just went and told the little apricots to hang on in there and that they are my personal favourites. Also, earlier this afternoon I cycled against the freezing northerly wind pretending to be fit and healthy. It was nice for a while, only I fell asleep the minute I got home and sat down, which was a bit of an embarrassment because you really look like an old geezer when you snore sitting upright. Anyway, I am now recovering to some form of sanity, awaiting the evening entertainment and drinking tea. The birds are very noisy and busy in the hedge and the sunset is spectacular.

*Ulster is one of the four provinces of Ireland, it is made up of six counties, four of which are part of Northern Ireland.