I’ve no idea what shape grief will take over the coming years, but I’m in for the long haul. The loss of human and nonhuman life, of systems and ways of living isn’t showing any signs of abating, and I think making friends with suffering and loss is one way through that promises a degree of sanity. Perhaps it’s because grief and love exist as a call and response to one another, a daily reminder in these times of the paradox at the heart of the human experience. It’s obvious to me that I can’t live a deeply human life without either, and that they are – everyone knows – intricately linked: we only grieve what we love.

This morning I sat with my grandchild by the kitchen window and pointed out the signs of autumn, leaves, spider webs, dried up flower heads, windfall apples, foggy air, cabbages and phacelia and a pale moon in the sky. Then we sang for a while, mostly Row, row, row the boat and If I had a hammer (with a real bell to ring). I am the happiest and the saddest person on earth.

Here are a few Holland pictures. 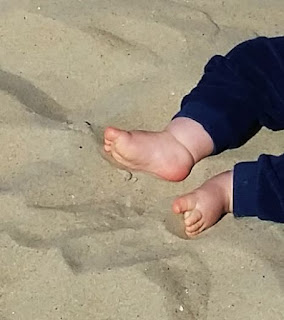 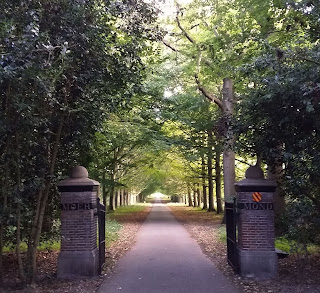 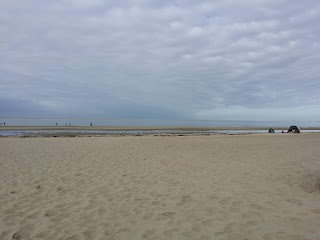 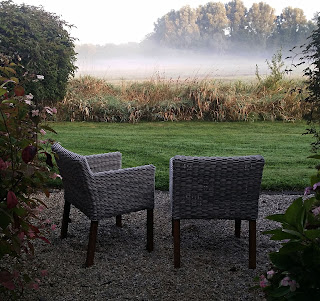 We are back. My father's gathering was the usual family thing, sly comments amid very loud laughter, story telling and three kinds of Zwetschgenkuchen with cream. He was happy and fell asleep sitting for short periods. It was very hot and sunny, I almost joined him but I cannot sleep while sitting.
The seaside was refreshing and calm and Dutch. The Dutch cuisine is to a large extent based on sugar and straight away, our teeth started aching. We cycled because that's what you do there. One of the bicycles had a child seat and the grandchild wore a cute helmet and waved a lot. From mid September the beaches are open for dogs and consequently, we made friends with several dogs. The grandchild loves dogs, and sand. We spent a lot of time watching the grandchild crawling after dogs through the warm sand.
Now we are back and my daughter has a cough and last night, R finally agreed to go to the A&E because the strange insect bites on his belly were definitely spreading and started to look suspiciously like - yes, shingles. We all started to itch and ache and have examined ourselves and each other about a thousand times by now but so far, it's just him. He is very brave of course and is taking the meds and seems to have no pain. When this morning, he started to fix some faucet and drill holes into a wall, I raised my voice and told him to get his act together and be sick like real.
Pictures to follow.
5 comments:

Pushing along. I am climbing mountains. It feels like it. Every day. So now they tell me that cutting down the cortisone after almost ten years does produce symptoms such as all the shit that is going on. Now! Seriously. There is me learning about the cortisol metabolism and how cortisone fits in and the adrenal glands and, wait for it, adrenal fatigue. Brilliant, isn't it, that there's a name for almost everything which feels great for a while until you realise it doesn't matter and certainly is of no help. None whatsoever.

Anyway, it could last for about 12 months, they said. And we all know that 12 months is one whole year. But, they said, it comes and goes. Ah sure. Doesn't everything. Come and go.

Cutting down the cortisone has now become my mission in life. I have a chart drawn. I am keeping a cortisone tapering diary and I am the best pupil in the school of cortisone tapering the young and well-dressed immunologist has ever had. He in his pretty argyle socks.

And, in the words of a learned and sceptical friend, if it all goes sideways, everybody'll know why and let them pick up the pieces then. Well-dressed or not.

There are bigger things to concentrate on. It rained! One whole day and most of the night. That was weird and wonderful. The word lush comes back into use. But with caution.

The larger family is assembling in my father's garden on the weekend. Instead of coming out in a rash, as some would at the the thought of 17 people talking at the top of their voices pretending to be close, I woke up with vertigo in the early hours and have been spending a considerable amount of time today dealing with seasickness and the various ways this causes voiding of half digested food stuff. Somehow I will get to sit in my father's garden eventually, R can do the driving, and once we arrive I could hide somewhere in a tree. Or under one.

After that, we are going to the sea side. At least it's booked. That's the plan. Let's not think of what could go wrong. In other words, I am on holiday. My boss suggested I take a rest. Very funny.

In an effort to not lose sight of the bigger picture, to avoid getting lost in too much self pity, and to keep the mind occupied during sleepless hours, I have listened to episodes from the Awake at Night podcast (https://www.unhcr.org/awakeatnight/) where "listeners will join UNHCR’s communications chief, Melissa Fleming, in personal conversations with an array of humanitarian workers, and learn what drives them to risk their own lives protecting and assisting people displaced by war". It's strangely uplifting, reminding me of the fact that there are good people everywhere.

I leave you with another sign of hope and happiness.

Trevor Mallard, New Zealand's House of Representatives speaker, bottle feeding Mr Tāmati Coffey's baby while he presided over a debate. Mr Coffey is an elected politician and is married to Mr Tim Smith and this is their son Tūtānekai Smith-Coffey.

And suddenly, the air is cool again. It rained for a short while. We are beginning to grumble about dark evenings to come. It has been a hot dry summer.

In the garden, losses, surprises and changes.

MOOC stands for massive open online course. MOOCs are provided online and free of charge by universities, incl. top universities, and institutions from all over the world.

When I explained the concept of MOOC to my father, I said it was an online activity for bored teachers and their wives. He understood.

A MOOC typically lasts for a couple of weeks and depending on how serious you are, you can spend between 3 and 30 hours a week on it. There is no pressure, you can take from it what you wish and drop out any time. The language of a MOOC is not academic but you are encouraged to use your brain cells. If like me you get lost after the first bit of statistic or maths, there is the discussion forum and about 2k people ready to explain. I am also known to have skipped the hard bits. Nobody noticed.

The worst was the MOOC from the University of Cape Town on the threat of a sixth mass extinction. I did that together with a friend who is a biologist because I am shit at biology. About half way through, we just sat there shattered and in tears, calling our daughters across the globe to listen to their carefree voices.

I have stayed away from all this dangerous fact finding since then. Despite the fact that I open my big mouth all the time.

But today, I enrolled again.
This MOOC is provided (free online, click here) by Harvard and MIT via edX:


Climate Change: The Science and Global Impact
In this course, you will explore the science behind anthropogenic climate change with climate expert, Michael Mann. By joining this course, you are becoming part of a global movement to act on climate change. The first step toward any action is knowledge and understanding.
Because, once you have a firm grasp on the science, you'll be able to translate your understanding into action, so we can ultimately curb our emissions and keep our planet from warming beyond dangerous levels.


The course is open to all and is accessible to learners without prior background in the topic of climate science.

(Michael Mann is professor of meteorology at Pennsylvania State University)

I expect to be completely lost. But if a 16 year old girl with Asperger's can sail across the Atlantic Ocean and less than an hour after disembarking, speak to the media in clear sentences (and that not in her native language) about science and facts, fully aware of the hostility awaiting her from - let's face it - angry white men, I can at least give it a try.