The sky is covered with a stainless steel grey layer of thin cloud, the odd glimpse of hot sun shimmering from behind. Sticky, yellowish air, still and heavy, from time to time a current of exhaust wafts in from the main street up behind the trees.
I opened up all windows at four in the morning to let in whatever fresh coolness was out there. Walked out into the garden to feel the dew under my feet. By half past seven, it was already gone. Breakfast below the rambling rose with my cold porridge, a handful of fresh raspberries and a cup of tea. The little old cat was not interested in chasing the blackbirds busy in the currant bushes. We both sat there leaning into the faintest breeze.
Somewhere to the west, the thunder is rolling and maybe by night time it will have moved close enough for the sky to open up, like a boil releasing the thick fetid air in one long hiss. 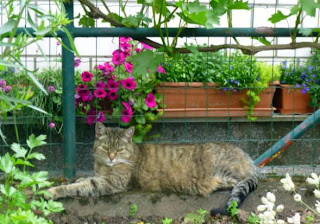