Patrick's day has come and gone and for an entire week this household was very busy and noisy. There was a short moment late Saturday night when I escaped to the upstairs bathroom to take a deep breath and my face in the mirror showed me this smile that was etched so deeply into my exhausted lines, I am still working on getting it off. Three days later.
Of course, I could go all what-has-become-of-me and this used to be a household with noise and music and banging doors and phone calls and pets and certainly more that two quiet persons going about their quiet little businesses.
I could, but I won't.
Instead, a little bit of Ireland. Here we have Philip King talking with a faint trace of a Cork accent and the lovely South County Dublin way of aspirating the consonants, especially the w.  It sounds gorgeous to my ears and it takes me about 10 mins to get back into it but considering the fact that I became bilingual in South County Dublin, this is my English.

Anyway, Philip is something of a very distant cousin by marriage to R. That whole six degrees of separation thing is a party game in Ireland. Not that he would know a thing about me.
And while he meanders on in this talk, showing off a bit and getting sidetracked, he nevertheless brings three gifts: a poem, music and a spectacular view.

On the most westerly Blasket
In a dry-stone hut
He got this air out of the night.

Strange noises were heard
By others who followed, bits of a tune
Coming in on loud weather

Though nothing like melody.
He blamed their fingers and ear
As unpractised, their fiddling easy

For he had gone alone into the island
And brought back the whole thing.
The house throbbed like his full violin.

So whether he calls it spirit music
Or not, I don't care. He took it
Out of wind off mid-Atlantic.

Still he maintains, from nowhere.
It comes off the bow gravely,
Rephrases itself into the air.


Next, the music or Port na bPúcaí (Spirit Music):

And finally, the view: 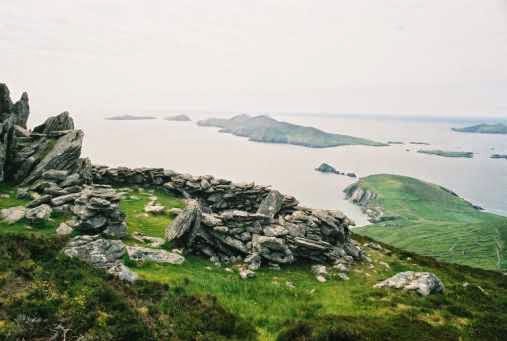 (I copied it from here.)

So many years ago, with our baby asleep with grandparents, we walked all the way up through the heather to look out over the Blasket Islands, on a mild summer's evening just before sunset when the air was still and we could hear the waves all the way down on the Atlantic.