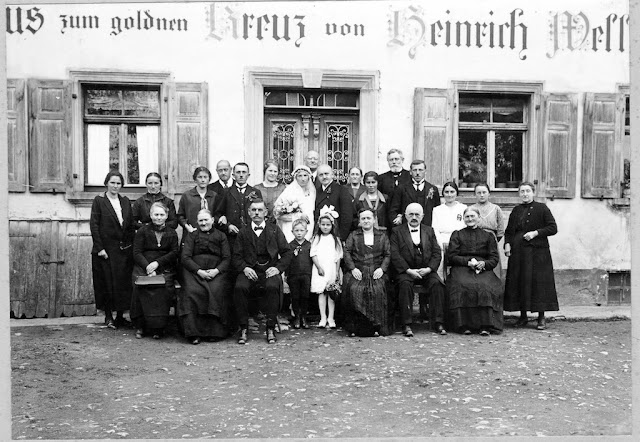 Another mysterious wedding picture from my father's stack of photographs. I can identify three people, my grandmother in the back next to the bride, the little boy in front is her first born and I think she is pregnant with her second child. Her mother, my great grandmother is seated holding on to her handbag in the front on the left.

The date is 1923. I made a copy of this picture and sent it to my father and we had a longish conversation over the phone. He does not recognise anybody else. We agreed that it must have been a once-removed wedding, a distant cousin from my grandmother's side, maybe not even a relative. The groom seems to be a fair bit older than the bride and I think the elderly mustachioed gentleman in the front row could be his brother.

My father thinks it was most likely a day trip, hence the large handbag and the absence of my grandfather. This was before the time of family cars. Living and working in a small provincial town required maybe a truck, tractors, definitely a couple of horse drawn carriages for the business, but families had no need to drive around in cars back then. It is definitely a rural setting. The towns had much better road surfaces. My father thinks his mother and grandmother probably hired a car with a driver for the day.

In the past weeks I have emailed this picture to every country hotel and restaurant within a 150 km radius from my grandparent's address at the time. I found only three country house hotels, as they are now called, with the same (or a similar) name as this 'The golden cross inn', but no, it's none of them.  The managers of all the other country inns and hotels of a similar age that I contacted must think I am slightly mad. One in a rather godforsaken spot replied with a lunch voucher for two.

I also contacted a couple of historical societies and received a few polite replies from what I assume are retired teachers who basically confirmed what my father said over the phone: forget it.
The name of the proprietor is incomplete and I haven't even started to look into this.
Rural Franconia was not dramatically affected by  the war, so it is unlikely that the building was bombed or burned down.  My brother suggests I write to the local papers. Maybe.

This picture is utterly Franconian. I can hear the accent and the noises from the kitchen.  I imagine that they will all sit down to eat Fränkische Hochzeitssuppe (beef consomme with lots of different vegetables and semolina dumplings), Tafelspitz mit Meerettich (beef with horseradish and apples), Eiernudeln (home made egg pasta, fat ribbons), Apfelküchle (apple pie), Franconian wine, the locally brewed beer, coffee for the women. I wish I could sit down with them.