"I can't be a pessimist because I am alive."

Let me start with a bit of music from Iceland. Just because.


The word of the day is rotten. I feel rotten. Physically that is, the mix of symptoms is yuk. Could be anything. Could be nothing. Probably something. I shall not be asking dr google again. Instead, I will just continue on the endless path through the complicated maze of diagnostics reserved for people with autoimmune diseases.
I could dwell on it in detail but apparently blogging about illness is not the thing to do. In terms of clicks and readers. But that's not why I blog anyway and it doesn't stop me from rejoicing about every single comment, wonderful readers.

So, against all trends and warnings, I shall just mention that I am spending this sunny Sunday lying on the sofa, distracting myself watching British tv thrillers, reading spy novels, solving cryptic crosswords, booking expensive flights to Portugal in eight weeks time - as one does.

And yet, yesterday evening, we cycled along the river just before sunset. The air was blue and pink and still and clear, the water was moving gently. People smiled. All was well(-ish).
If I can do that I can fly to Portugal. Not? 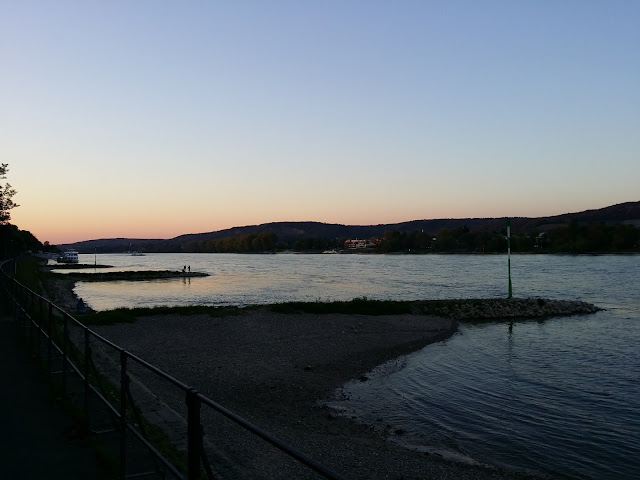 Last Friday, I had my first day at the rehabilitation centre. This is going to be hard and great fun. In my worst dreams I see myself failing dramatically, as in passing out and exiting the place on a stretcher. In my best dreams, I am walking out of there in three weeks time like a young deer, skipping and jumping. I am already deeply in love with the staff of experts and miracle workers. Anyway. Three weeks.

A few nights ago, I watched I am not your negro (because reading James Baldwin as a teenager changed my world) and from my distant and insufficiently researched and highly opinionated vantage point, aka high horse, Baldwin's argument here (from his 1965 debate speech at Cambridge University’s Union Hall) explained to me why that trump geezer got elected after eight years of Obama.
To punish, to show all those liberal and open minded and diverse people who's boss after all.

Tell me I am wrong, tell me I am ignorant. Whatever. (But watch the film if you get the chance.)


"I remember, for example, when the ex Attorney General, Mr. Robert Kennedy, said that it was conceivable that in forty years, in America, we might have a Negro president. That sounded like a very emancipated statement, I suppose, to white people. They were not in Harlem when this statement was first heard. And they’re not here, and possibly will never hear the laughter and the bitterness, and the scorn with which this statement was greeted. From the point of view of the man in the Harlem barber shop, Bobby Kennedy only got here yesterday, and he’s already on his way to the presidency. We’ve been here for four hundred years and now he tells us that maybe in forty years, if you’re good, we may let you become president."

read the source
watch the clip