In August of the year 1918, an assistant lawyer of the government in Munich travelled by railway to F. He was on his way to inspect the new post he had been assigned to as head of the tax authorities.
At the railway station as he turned to walk to the address he had been given, he noticed a young woman setting off by foot in the same direction.
Too soon he stood in front of the tax office.
Upon his return from F. he told his mother that he had seen the woman he intended to marry.
And so it happened that less than one year later, I became his wife.

I don't know when my grandmother wrote this, judging by her handwriting and the paper, maybe early 1950s. I found it taped inside the lid of one of the boxes of letters from my father's (ie her) sitting room chest.

For several weeks now, I have sorted these letters back an forth in various ways, by date, by writer, by recipient, unsure how to proceed. There are several hundred.
In the end, I decided on sorting them by writer and then chronologically. On one of the hottest days so far, I was squatting on the floor of my study surrounded by stacks of brittle paper, afraid to switch on the fan. It was very tempting to just read and read, despite the handwriting (in Sütterlin font) - challenging and in some cases, probably impossible to decipher. My great grandfather, for example, wrote in what looks to me a selection of fine horizontal lines.

The letters from my father's brother, dating from 1930 to 1956, I carefully stored in a large and sturdy document box and sent them by registered mail to my father. They need to be somewhere in Franconia, don't ask me why, just a feeling. He wrote home from boarding school, university, various army postings in Greece, Albania, Croatia, Latvia and after the war from his first postings as a junior judge out in the sticks. I can't even begin to explain how he wrote, the details and the careful omissions to spare his family, the repeated requests for tobacco and news from his favourite football teams. The description of snow capped mountains in Albania on new year's eve 1944 and his coded message for it all to be over soon.
In his last letters from the early 1950s, now a married father of one, he repeatedly and somewhat exasperatedly suggests to my grandmother weekly phone calls as a much more direct way of communication. This must have taken some persuasion as she again and again stresses in her letters the importance of what she calls the decent habits including her Sunday task of writing at least three letters before dinner.
My father is reading them now and over the phone I can hear there is joy and heartache in his voice. Next week, he will hand them over to his three nephews, his brother's sons.

Today, I have started on my grandmother's letters, one a day I promised myself, just one.  At this rate, it will take me forever and a year. And while this little snipped above is strictly speaking not a letter it is nevertheless the oldest event mentioned and in every way the basis of all of this unexpected treasure that is covering my desk.

Here is the couple, both a bit younger than on that day. 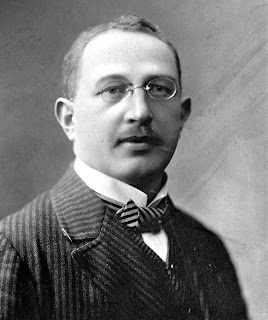 My grandfather was 43 years old when he first spied my grandmother that day. She was 24. WWI was in its final year, the Allied Advance had just begun, the German forces retreating. My grandmother's brothers were still at the front. My grandfather, apparently, was considered too important for the efforts of the government tax office to fight in uniform. Whatever.

All my life I have been told that this marriage was not a love match, that my grandmother married for status. It certainly fits with her character and the person I got to know. But, well, there is stuff I have been reading that tells me otherwise. I'll never know, it's too easy to come up with a romantic answer. If anything, these two are now even more mysterious to me.
Labels: family, memory