We carry magic. But so does everyone.
It lies in water.
Human beings are mobile wells of mildly salty water. As every schoolchild knows, our bodies contain the same fraction of water—71 percent—as the portion of the Earth’s surface that is covered by oceans. This is no mystery. We are water animals born into a water planet. Water is everywhere and nowhere. It is a restless compound—transitional, unstill, always on the move. It shape-shifts constantly from gas to liquid to solid and back again. (Even frozen at the South Pole into a mile-and-a-half deep cap of ice that is one million years old, it still flows, albeit slowly.) The oceans hold 97.25 percent of all the water on the globe. The poles and glaciers trap 2 percent. The absurdly small, drinkable droplet that remains— the precious 0.75 percent of liquid fresh water that Homo sapiens relies on for survival—we squander like madmen raving in a desert.

One oxygen atom. Two atoms of hydrogen.
Water molecules are bent like an arrow tip, like an elbow. This gives them a certain polarity, an infinitesimal charge, that collectively shapes the world. They are the magical solvent, binding and dissolving brain cells, mountains, the steam of morning coffee, tectonic plates.

This is the river, a short walk from our garden gate, after a hot summer without rain. 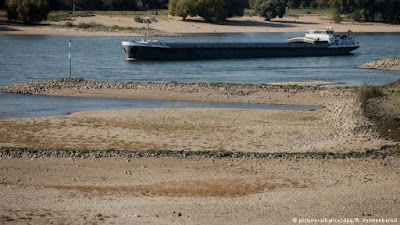 This river, our river, the Rhine, is fed to a large extent by glaciers in the Swiss Alps. Here, we see the development of water strored in these glaciers. According to various climate scientists, all in agreement, more than 70% of the remaining volume of water stored in these glaciers will have disappeared by the end of this century (my source: Swiss Federal Office of the Environment, FOEN, 2012). 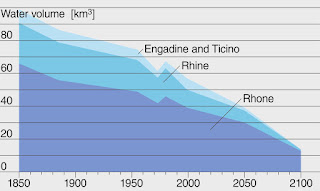