In some remote corner of the universe, poured out and glittering in innumerable solar systems, there once was a star on which clever animals invented knowledge. That was the highest and most mendacious minute of ‘world history’ – yet only a minute. After nature had drawn a few breaths the star grew cold, and the clever animals had to die.

I struggled with Nietzsche (and not just the spelling of his name), he was introduced at a most unfortunate time in my life when I was 16 and philosophy was taught at 2 pm. I vividly remember struggling to not fall asleep in class.  I was a poor student with poor grades but I did have a couple of brilliant ideas at around that time and possibly also later on, but definitely before I started school when there was knowledge sprouting out of every crack around me and all I had to do was watch and ask. That time when I thought that people basically grow up, not just in size but also in knowledge and understanding and that I was going to be one of them, eventually.

But despite the fact that Master Nietzsche was convinced that a woman who has scholarly thoughts must be sexually frustrated, he had a point there about the star with the clever animals. OK, so he got the thing about the temperature slightly wrong but basically, clever counts for nothing.

Today, January 15th 2020, the temperature rose to 14°C, a first for January. In the garden, calendula, Sweet William, assorted roses etc. have been flowering since last June. The fruit and nut trees are budding. There has not been enough rain this winter.

In other news, I am mentally preparing myself to return to work tomorrow. Physically, I am not yet convinced but what could go wrong.

Totally unrelated, here are today's contents of our bread basket. 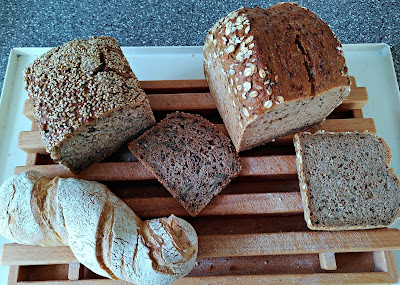