You'd be surprised how quickly 2 kg of blueberries can be consumed in and by a small household. In other words, there is very little left. We are now stuffed and have restocked our storage  of antioxidants or whatever beneficial ingredients blueberries surely must provide.

June has become sticky and close with short heavy showers. The garden is happy. 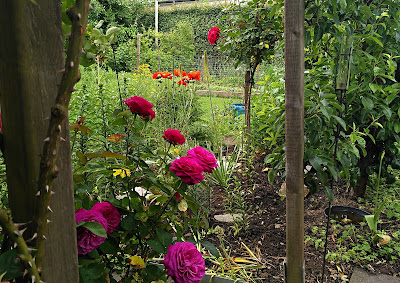 The roses have made their spectacular entrance to this year's season. 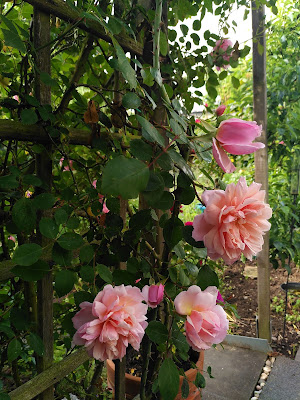 My favourite virologist has given another interview explaining his hypothesis of the origin of the Sars-2 virus and explaining why herd immunity is not what we need to look at. My rough translation (for the original click here):

In 2003, a doctor in Singapore contracted an unknown virus. Then he flew to New York, and there he got sick. It was known that he had been in contact with seriously ill patients in Singapore. On the return flight, the plane landed in Frankfurt for a refueling stop. The man was taken off board and placed in an isolation ward. At that time I was working in Hamburg at the Tropical Institute, which looks after imported infectious diseases, and had just developed a laboratory method that can identify viruses that had never been seen before. That's how I got involved in this detective story. At that time it was already epidemiologically clear that something was happening, something new, transmissible and triggering pneumonia, but nobody knew what kind of virus that was.

I applied the new method, and it turned out that there were sequences in this patient's virus from a coronavirus that were not yet known.

At the same time, the Centers for Disease Control and Prevention in Atlanta had additional sample material from a second patient, a WHO doctor who had died of this disease in the intensive care unit in Bangkok. We were able to show through a joint investigation: two patients who have never met, but who both had an indirect epidemiological connection became ill in the same way from the same virus.

It is not that bats bring such a virus directly to humans. In my field work, I examined Sars-like coronaviruses in bats. In the laboratory, we could show that these Sars viruses in bat populations are not easily transferred to humans. So which animal is the in-between carrier? Often these are farm animals that are crammed together under conditions where the virus can boil up. Humans interact with these animals differently than with distant wild animals such as bats. Take fur animals. Raccoon dogs and viverrid cats have their fur pulled over their ears while they are still alive. They let out death screams and roar, and aerosols are emitted in the process. Humans can then become infected with the virus. These animals were shown in the early 2000s to be the source of Sars-1. And now Sars has come back, as Sars-2.

For me the source is the fur industry. The laboratory hypothesis, that Sars-2 is man-made, does exist. If you look at it from a purely technical point of view, if you just look at the genome, that's within the realms of possibility. But I know the techniques very well that you would need to change a virus in this way. If someone had developed Sars-2 in this way, I would say they chose pretty awkward method.

There are actually two laboratory hypotheses. One, that it is malice, that someone intentionally constructed such a virus. The other, that it was a research accident, that in spite of good intentions and curiosity, an experiment went wrong. The malicious thing, to be honest: you have to talk to intelligence officers about it. As a scientist, I cannot judge that.

You can't just put a virus in a Petri dish and do some kind of experiment with it. Building a DNA clone like this from a virus takes two to three years of molecular biological work. By the way, researchers actually have made such clones from the original Sars-1 virus. So if you had wanted to develop a kind of Sars-2 in the laboratory, you would have added changes to a Sars-1 clone to find out if this adaptation makes the Sars virus more contagious. But that is not the case here. The whole backbone of the virus is different: Sars-2 is full of deviations from the original Sars-1 virus.

Let me explain it with a picture: To check, for example, whether adjustments make the virus more contagious, I would take an existing system, incorporate the change and then compare it with the old system. If I want to know whether a new car radio improves the sound, I take an existing car and replace the radio there. Then I compare. I'm not building a completely new car for it. But that's exactly how it was with Sars-2: The whole car is different.

This idea of a research accident is extremely unlikely for me because it would be far too cumbersome. So the most plausible source is carnivore breeding. The fur industry.

I have no evidence for this, except for the clearly proven origin of Sars-1, and this is a virus of the same species. Viruses of the same species do the same things and often come from the same source. In Sars-1, this is scientifically documented, the transitional hosts were raccoon dogs and viverrid cats. It is also a fact that raccoon dogs are used extensively in the fur industry in China. If you buy a jacket with a fur collar anywhere in the world, it is from the Chinese raccoon dog, almost without exception.

Fur animals are predators. They eat small mammals. They also chase bats in the wild. And bats only have one short window a year where they all have their young at the same time. A lot of newborns fall from where they are hanging during day time onto the ground. And these wild cats know that. They go into bat caves and eat their fill. And they can catch such viruses in the process. Often, the fur farms add wild animals to their stock. That’s why it’s easy to imagine how such viruses were introduced into these breeds. This is an industry with close contact with people, where they can become infected.

Fifty or sixty years ago, when an intercontinental flight was the exception and only diplomats flew to China and trade with Asia was carried out via shipping containers - at that time such a virus would not have spread so easily. Travel makes it easier for a local epidemic to turn into a pandemic. We humans use more and more land from the wild animal area and intensify livestock husbandry. We eat more meat. The richer people get, the more they use animals. The denser and larger the animal population, the greater the chances that a virus, once it is introduced into the population, will explode and mutate like Sars-2.

The concept of herd immunity was a misunderstanding from the start, to think that 70 percent will become immune - regardless of whether through vaccination or infection - and the remaining 30 percent will no longer have any contact with the virus from then on. It's just not the case with this virus. Anyone who does not get vaccinated will contract Sars-2. The term herd immunity comes from veterinary medicine, from the cattle plague virus, the measles virus of cattle. Highly transmissible, but can be prevented for life by vaccination. There you can really do such calculations: We have a livestock population that is self-contained - how many of the animals do we have to vaccinate now so that the virus cannot circulate? That's where this term comes from.

But we humans are not a closed herd. We travel and we exchange goods, and even without traveling there is the neighboring village, and that has a neighboring village and so on, all around the world. And this is how viruses spread. In a few years, one hundred percent of the population will either have been vaccinated or infected. Even after that, Sars-2 will still infect people, but then it will no longer be like the initial infection. The initial infection is the stupid thing, after that the disease that causes it is less bad. It will probably be some kind of cold.