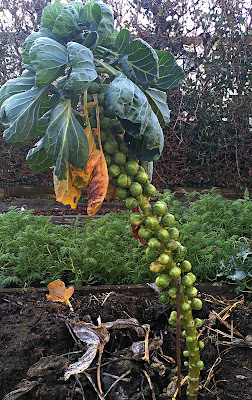 This is about all that's left to harvest in the winter garden, for us humans that is.

In the bed behind, there's phacelia growing which will be dug in to prepare the soil for the corn runner bean squash mix. Also, the first little pots with seedlings have appeared on the window sills. It's a start, as every year.

It's really cold now. It takes me ages to warm up when I have been outside. I tried pretending I am an arctic explorer while cycling along the river. It doesn't make it any easier and for the last two days, I've stayed in pretending to be old and unwell. Instead, after working in my snazzy home office until late afternoon, I do a bit of this and that. Not that there is much of this and that to do. I could roll into a ball and hibernate. But:

I will admit that there are other people who are primarily interested in doing something. I am not. I can very well live without doing anything. But I cannot live without at least trying to understand whatever happens.

My employer stipulates daily self-administered lateral flow testing which means that every morning, R can poke with a narrow white stick into my throat and around my tonsils or rather the space where my tonsils once lived. He enjoys doing this. The things that make a man happy. He has also turned into a kitchen tyrant manager, I am allowed a slot on Sundays for dinner and the occasional banana bread baking. And even then, he walks in to check whether I am using the proper ingredients. As the saying goes, a marriage is an economic relationship built on trust.

Anyway, I made this risotto with the Brussel sprouts and it went down a treat.

And soundtrack. I taught the chorus line of this song to a gang of kids under the age of seven while driving them to Brittas Bay for a Sunday afternoon by the sea. I shiver when I think that back then we had neither seat belts nor kid's car seats in the back.

All that natter and telling of anecdotes is me cleverly disguising that I am truly deeply scared now. I know from past experience what well-known, middle-of-the-road infections, the ones with medication to treat, can do to my immune compromised body. Basically, always a hard time. So this covid bastard could top it all.