in praise of nasturtium 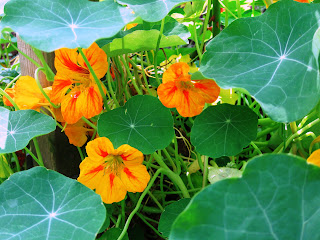 It is mid November and almost all the leaves are down. Some of the nights it has been quite cold, a touch of hoarfrost now and then.
All summer the nasturtium were hidden by other beauties in the garden. When they appeared, it was a surprise but we soon ignored them. Usually, they turned out a mess covered by black aphids.
They started flowering in September, late. And what an abundance. The garden gate is almost entirely covered and they are climbing up the already leafless pear tree. Every morning when I look out into the garden I expect them to be killed by the cold night only to find them even more robust. I go out an pick a handful for the kitchen table and another for Rs desk and one for mine and they wink at me with their intense yellow heads.