Graffiti, amateur graffiti, occasionally is a desperate attempt to make some sort of point and occasionally it's just funny (and often just plain rubbish).
In my 'radical' student days I shared a ramshackle old house with various other 'radical' students for a while. We were cool, chain-smoking, ready to change the world and also occasionally attending our courses and lectures in between sit-ins and strikes and marching on the street against all sorts of issues. Nothing too dramatic in those times. And: We were too well  behaved to spray on public walls. We did our scribbling inside and out of danger.
The kitchen was upstairs under the roof and the grafitti on the second-third-hand fridge was:
If you don't want to eat you are not allowed to work.
Haha.
Above it on the sloping wall someone had written:
We are not interested in your bits and pieces - we will never be satisfied with anything less than complete freedom.
Did I mention that we were 'radical'?
Years later I saw on a public wall in Heidelberg:
I don't just want one piece, I want the whole cake.
And recently in Berlin across an entire bridge:
We don't just want a piece of cake, we want the whole fucking bakery!
And right now I don't just want to sort of get through life with itsy bitsy days of feeling sort of better-ish and other days feeling like shit - I want the whole healthy me and occasionally I desperately want to go out there with a spray can.
But my 'radical' cool days are over. This is it now. 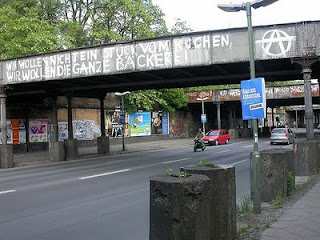 Labels: anger, memory, stuff about myself