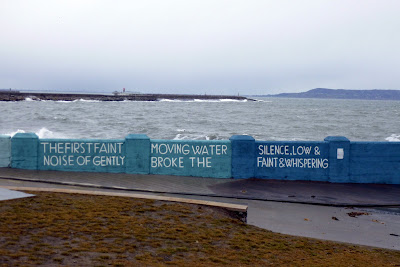 James Joyce lived down the road from this harbour wall. It was probably a much calmer day when he wrote this.

She was alone and still, gazing out to sea; and when she felt his presence and the worship of his eyes her eyes turned to him in quiet sufferance of his gaze, without shame or wantonness. Long, long she suffered his gaze and then quietly withdrew her eyes from his and bent them towards the stream, gently stirring the water with her foot hither and thither. The first faint noise of gently moving water broke the silence, low and faint and whispering, faint as the bells of sleep; hither and thither, hither and thither: and a faint flame trembled on her cheek.

Just up and across the road to the left is Teddy's, where JC would buy ice cream for whoever was with him, kids, grandchildren, wife, daughter-in-law, neighbours, and we would all sit on that wall, watching the dogs running in the surf. On rainy days, we stayed in his car, listening to Gaybo on the radio.

The sublime and the ridiculous are always close in this part of the world.
Labels: Ireland, memory