I have been grounded by my GP once again and tomorrow she wants to do the full check-up whatever that is. I am due at 9 am without my breakfast but with my urine sample. I feel like a fake. Or: I wish I could feel like a fake. There is hope for a simple explanation but also not denying the fact this year has been rather shitty and my sick days are mounting up. Already got one letter from the personnel dept. offering me assistance with occupational rehabilitation. I got such a fright, I tore it up and stuffed it deep into the kitchen bin way below the yukky bits so that I wouldn't even attempt to fish it out again.

Instead, I doze or try and follow the plot in True Detective (I have no idea what's going on but Colin Farrell is doing a great job with the eyebrows). Occasionally, I freak out and wash the kitchen floor or clear away the stuff in front of the damp patch on the basement wall that looks so much bigger in my imagination than in reality. Still, there it is and we are arguing about its significance and whether the house will start to subside or rot away underneath us. We disagree wildly here and no longer communicate about it face to face. Instead, we send each other emails with drastic illustrations (me) or silly pictures (R).
Looking after an old house can be quite a job, a bit like looking after an elderly overactive relative.

Anyway, after every bout of activity I am met by what my GP calls a significant loss of physical energy and it takes me a while to un-wobble my knees, so to speak. Which admittedly is a bit weird but - see above - hopefully with a simple explanation. I try not to think about it too much and spend my sleepless hours listening to our new neighbour across the road who sits outside at night skype-ing with someone faraway speaking foreign languages in a deep baritone. There is occasional laughter but he sounds lonely. I contemplate all sorts of explanations and even consider inviting him over (this is not the thing to do here, believe me) but in the mornings, his blinds are down, his doors are shut and I am not sure. Maybe it was just a dream.

Tomorrow, the second set of our three sets of summer visitors is arriving, probably full of energy. Theoretically, we are going to do all sorts of stuff. Including a very long scenic drive on Sat. to celebrate a birthday followed by a week swimming in and frolicking around clear Alpine lakes in Austria. Theoretically. 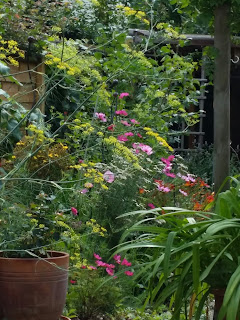