I am now the age my father was when he retired. He was offered a golden handshake in one of those corporate takeover scenarios. It took him a year to settle his things and then he walked away from his old life and disappeared for a while. Many years later, he told me about those months. Mostly reading, walking, cycling, museums, listening to music, photography, lots of sleep, he said (he forgot to mention the women). My parents never met again. Lawyers did the talking. Phone numbers were changed several times. The biggest mistake of my life, he often tells me, marrying that woman. I used to shout at him then. Don't speak like that, I am your child and so on. But he never listened to me anyway.
The last time I met my brother, his face went white for a second. You look a lot like her with this haircut. For a moment I thought . . .
I turned to my father and asked, do I look like her? How much do I look like her? Tell me!
I have no memory, he replied. That woman is dead and gone. 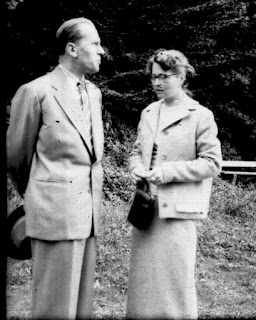 My parents on their wedding day. 1954. Not quite nine years after the end of WWII. Two young scientists with big ideas and bigger plans. Soon life caught up with them.