Idomeni is a small village in Greece close to the border with Macedonia. At the moment, about 13,000 people, mainly Syrians and many of them women and children are stranded there since Macedonia has closed the border. They are stranded in the rain and mud with only very basic support from NGOs, individuals and a pretty helpless UNHCR.

Menawhile, European politicians have decided that the seemingly never ending streams and constant images of people fleeing war and poverty has a negative effect on their powerful positions. People in Europe, they say, are sick and tired of seeing all this misery. Not our fault, they say. Don't come, they say. Turn back, they say. We don't want to share our wealth with you. We don't want you to mess up our good life. We don't want to help you. We had enough, we are shutting the doors.

So they are working on a clever deal with Turkey, which will involve shipping contingencies of desperate people back and forth like containers loads on heavy goods trains.
This is the same European Union that was awarded the Nobel peace prize, btw.

Idomeni is another word for shame. 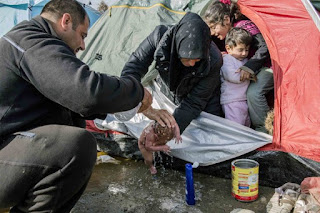 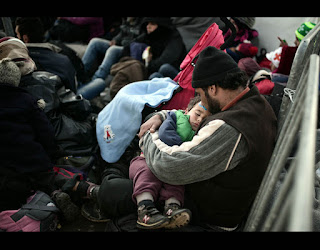