Here is another photo from my father's stash. The box I was allowed to take as my share of his estate. He thinks these are useless mementos or maybe he imagines I sell them and make lots of money.
It's all in my head anyway, he says, what do I need old photographs for.

The year is 1943. The location, a Franconian town in northern Bavaria, first history records dating back to the 13th century, dominated by a large Baroque castle with impressive grounds. Napoleon's troops passed through it on their way to fight the Prussians. The group is standing on the stairs to the back entrance of their school, which was founded in 1528.

It is the last day of school, not because the boys are about to graduate (they are barely 13 years old), but because of the war. The school will shut down, the last remaining teacher is posing here with his class. He taught the Classics, Homer and Tacitus, rhetoric, logic, debating. Unlike his colleagues, he is too old to be drafted. However, in less then two years, he and all of these boys, will be put into ill fitting uniforms, armed with the dregs of the remaining weaponry and sent off to utterly and completely unsuccessfully defend their hometown against the approaching US army. But that is another story. 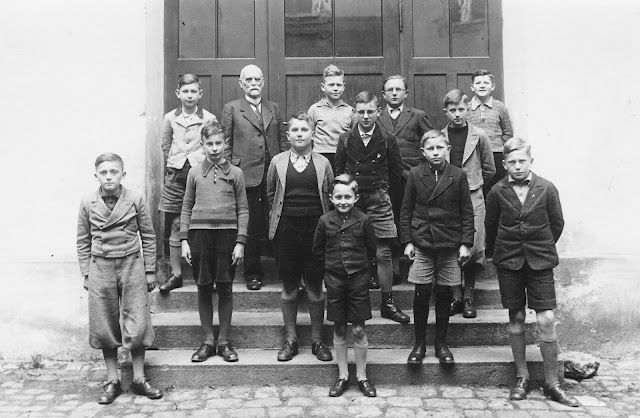 My father is the tall one on the right in the front row. When I asked him about the pins on some of the lapels, including his, he was not sure. There was so much you had to be careful about, even in this sleepy town, he said shaking his head. We were reciting the Iliad, debating Plato, what did we know.
They all survived the war but today, my father is the only one still alive. The small one in the front was my father's best friend, an artist and professor of fine art at the university of Munich, a member of the Munich Secession. When I last met him three years ago, he was wearing a handwoven tweed jacket with a dramatic pink silk scarf, his leonine hair like a white crown. He kissed my hands and told me to always wear something blue to match the colour of my eyes.
After his death two years ago, my father almost cried, little Ernstl is dead, now I am all alone.