in which I try to come up with a positive outlook

I just wrote another whiny post about my life as a stranded beetle in pain and halfway through writing it, I knew. This. Won't. Do.  All my pep talks about how my body constantly produces new cells striving for health. Useless at 3 am. Anyway, it is down below as a record of this cloudy January morning with a few snow flakes here and there.

For now, let's take a look at this: 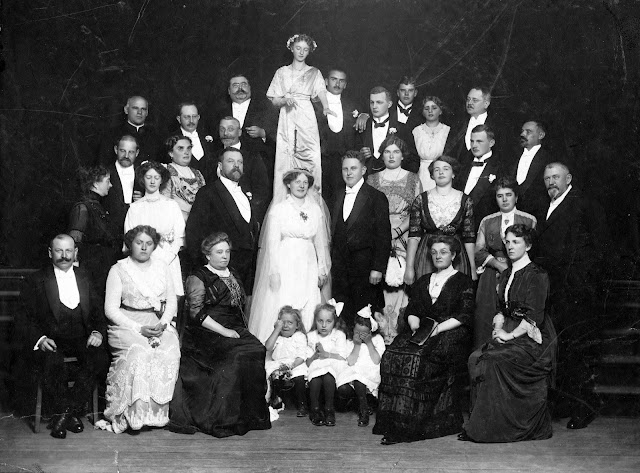 I found this in my father's sideboard last summer. Apparently, this is the wedding of someone from my paternal grandfather's family, maybe his sister's. I recognise nobody, my grandfather is not in it, so it must have happened before my grandparents got married in 1919.

This was the Munich branch of the family, the wealthy educated bourgeois members of a wealthy society. They had salons and debating clubs and musical soirees. These men were judges, attorneys and senior civil servants. The women were wives and sisters and daughters. They did needlework and played musical instruments. To my eye, the picture looks like a game of charades, the "crying" girls, the "angel" holding her hands above the couple. I wonder if they were ready to burst into laughter. Or maybe it was a fashionable thing young people did at the time, barely tolerated by the more elderly (female) family members.
But maybe it simply was like that, two upset little girls, the sister of the bride a bit tipsy on a chair in the back, playing up. The spinster aunt on the right not amused. The protestant pastor on the left keeping his distance.
Actually, I think this picture was possibly taken before the first world war. If so,  Munich was still the capital of the kingdom of Bavaria.
I wish I knew more about photography and fashion and eye glasses to date this picture.

Whereas the lament earlier was as follows:

Once again I wake at 3 am with that pain all along my right leg.  And my mind goes into overdrive. Before I know it I see myself battling a future life with chronic pain. Jeez. This is night 10 after surgery. Early days. I hope.

Thing is, I recognise nerve pain. It's bloody obvious. Ten years ago I lived through the great dentist disaster and although I eventually came out at the other end alive and well I very much don't want to have a repeat experience elsewhere in my body.

R is grumpy and worried and coughing and insists on me eating some toast, which I find almost impossible. My brother calls and again, we compare notes on our various surgeries and injuries. Stay on top of it, he tells me. Distract yourself.

Make yourself small, says the tiny voice in my head. The world is enormous and this is a small event. Watch yourself cope and remember that millions are also coping, mostly under worse circumstances. But also: prepare yourself and seek help.

I am scared. It's the easy option for now. I am not proud of myself.
Labels: back surgery, family, shit happens