with the appropriate soundtrack

After lunch, in a brief moment of mental derangement I decided that I was fit enough to walk down to the river and back. So while R ran after me, cursing under his breath, I marched on until exhaustion caught up with me and forced me to sit on a low wall by the cemetery until I had recovered for the slow crawl back home. There, in the cold damp February drizzle, nostalgia joined us with memories of our tropical past. 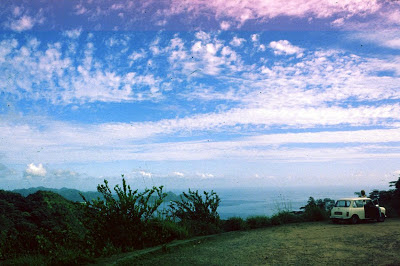 This is the view to the west across the Indian Ocean after slowly driving upwards on seemingly endless and very narrow hairpin bends through the rain forest. Further on and up, through ever deeper forest, there is a small tea plantation, a deserted Capuchin mission and then the road starts to dip down towards the east, the harbour and the airport.
It is late afternoon, definitely a Saturday or Sunday, on weekdays we would not have had the time to go for such a long drive after work and before sunset at 6pm. I think this picture was taken in November 1988, because sometime before xmas that year, this car caught fire and quickly burnt down to a pile of stinking rubble. The school holidays had started and R was driving three little girls, S and her two Swedish friends, to one of the beaches on the west coast for the day. They got out in time, laughing and singing, all unharmed.

I was working that day and soon after this happened - miles away - one of the government drivers, who considered the air conditioned office as their lounge, quietly walked up to my desk and waited for me to look up and
ask him what's the matter before he explained, very politely, that everybody except the nice white expat car was fine. And when I looked up and around the office in disbelief, I realised that everybody had known for a while, that in fact, this was the reason for all the annoying whispering earlier that had made me so nervous (I was new at the job and under constant observation). And while I sat there, at a loss and quite shocked, every one of 'my staff', one after the other, walked up to me, shook my hand, and Jude and Pascal, the magical twins, told me that they would take care of it. And they did. They always did.
These two watched over me, they spoiled me, they drove me nuts, they danced and sang during work, we hated each other and we loved each other. Some mornings, I would find my desk decorated with fresh bougainvillea and heaped with pink mangoes, while they both carefully explained why today, a small amount of money may be missing - temporarily of course - from the petty cash. Things always worked out in the end. 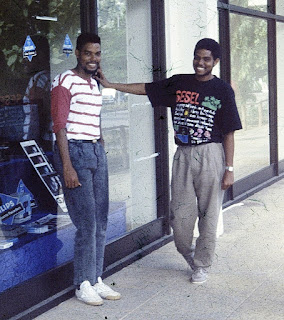 I never drove that car, it was too dodgy for my nerves, too many tricks to get it started, too neglected by too many previous owners who would pass it on like gold dust after their two-year expat stint. Then of course, the roads made me nervous for a long time, miles and miles of steep bends, sheer drops and no hard shoulders, thick forest and then the rain, almost daily, torrents, steaming floods.
The car we got after that was even more dangerous but soon I had gone native and wild and could drive those hairpin bends with my eyes closed. 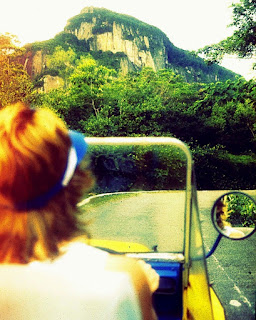 The twins are both grandfathers by now.

Labels: memory, music, my prince on the white horse, paradise