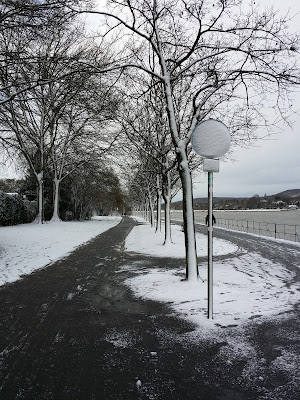 We got up at the crack of dawn. In fact, before sunrise, but that's easy in December. Last week when I mentioned to my Heidi Klum colleague that midwinter was only so many days away and she replied with her beautiful eyes all big and round, really? I almost said that it happens every year at the exact same week but instead I just nodded and she was so happy.

Anyway, after we got up so extremely early, we cycled in the dark to the station and took the train to the big city of Cologne because I had to attend a hearing at the Social Court. We both felt extremely sorry for the poor commuters crammed into the train around us and slightly smug for not being one or rather two of them.

The hearing went smoothly and as expected I lost my case but not without the judge telling the lawyer representing my health insurance to be a tad more socialist in future. As the dispute value was below 150 euro and since I had lodged my claim for non monetary reasons (also there are no costs/fees involved for plaintiffs at the Social Court)  everybody was happy with this lesson of participatory democracy.

Afterwards we briefly looked at the imposing-as-ever front of the big fat cathedral, complete with queues of Asian tourist, Peruvian pipers and schoolkids singing carols. Inside the station,  I bought an overprized small bowl of apple and walnut porridge from a hipster bar because the train back home was delayed as expected. The porridge tasted a bit lot like the papery wooden bowl (with such a pretty wooden spoon) it was served in but at least it provided some warmth and I did not want to spoil the day getting a coffee-to-go in one of these non-recyclable you-call-this-paper cups with a plastic lid because I was right up there on my moral high horse.

The last couple of weeks have been hard. Professionally, especially. While most of my colleagues are delightful and delighted to have me back for a couple of hours four/five days a week, there are some who think it's time for me to act my age and my illness and make way for a younger, healthier and most importantly, cheaper person. So for a few weeks, we moaned and grinned and some called it mobbing and I didn't really because I put my foot down - and in it - for a bit.

Predictably, I will once again get too ill to work sooner or later and we shall see. But it left a dent in my armour, disrespect, disregard does that. If you let it. If I let it.

As for the bigger world, I am in despair and seriously so. I find myself in need of excessive hugs and love because well, what is happening to us? I want to scream. I want to shake people out of their apparent shopping stupor and their sloth and what feels like grievous neglect but what do I know. They all may be crying inside.
(But: Watch this video and read the comments and tell me I am imagining it all.)

Mostly, I feel ashamed. For my failure, for my lack of action. For being old and ill (and watching The Crown on netflix).

So here, let me moan and lament for a bit that I cannot see a light, a tiny, flickering one at least, of goodness and promise on the horizon.

The man in the house is trying his best to be reassuring, elaborating on tipping points and how species adapt until I ask him to shut the fuck up. 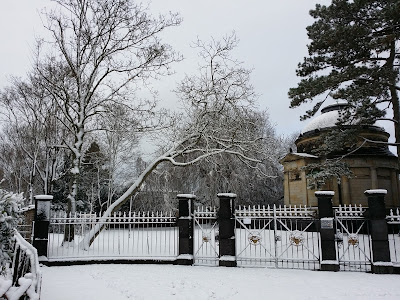 Also, it snowed - think blizzard - briefly, on Sunday and I don't do winter (as explained here).