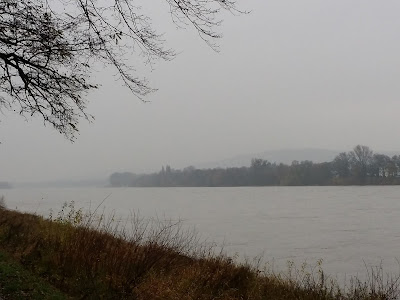 We wake to a cold grey day, a slushy snowfall, the smoke from the chimneys is drifting sideways and everything is silent. It could be a day for candle light and advent stuff but I am not so inclined. I wonder what will happen to that fat box in the basement with the trinkets and baubles and the beeswax candles in their fancy clip-on holders.
It sits right next to the box with my mother's tea set and the one with my aunt's coffee set and the one with my grandmother's stemware and the engraved tumblers (my father's initials), the heavy crystal (you could knock someone out with the creamer), the silverware in red felt cutlery trays. Upstairs, there is the drawer stuffed with the thick table linens, matching and monogrammed napkins (my grandmother's initials).
Boxes and drawers of memories, dark rainy Sunday afternoons, waiting, willing the clock to move forward, may I leave the table. Denied. Just because. Be still, for once, oh do keep still for goodness sake.
I can count on one hand the times this stuff has been used (and duly washed, folded/repacked again) in my house.
Once, I tried to flog it but I am not the only one trying to cash in on dull childhood memories, it seems. Unfortunately, the market is flooded with gold edged bone china from the 1950s and incomplete sets of WMF silverware.
One day. Out it will go. But for now, I hesitate and I don't know why.

It was easier with the books. The almost complete 18-something century edition of Goethe, every morsel he ever wrote except for that one missing volume, which according to family folklore, was appropriated by one of the GIs who occupied my grandparent's house for five years after the war. As a souvenir. I rather like the thought that he read it and forgot to put it back on the shelf.
(Goethe is to Germans what Shakespeare is to the English speaking world.)
However, for the antique book trader (and I am not one) that one missing volume is a most dreadful thing to be burdened with rendering the remaining 74 or so bound volumes totally and utterly worthless. Think stamp collections.
I chucked the remaining ones out with great relish.

I fell in love with Goethe once, in my final year at school. German literature class in the principal's office, Persian carpets, deep armchairs, just the five of us watching him pour tea and pass the delicate cups around, while we twiddled with our beads and bangles and braids (get it?).
Whatever, we were cool.
For six months we went through Goethe's tragic play Faust with a fine comb. To some, Faust is simply the most important work of German literature, but I didn't care, all I needed was to top up my overall score. I steeled myself for nothing but boredom. But, oh, the sheer brilliance of it.  Especially when you are 17 years old. Every page was brimming with meaningful stuff that I needed to underline and reread and learn by heart:

"As soon as you trust yourself, you will know how to live."

"There are but two roads that lead to an important goal and to the doing of great things: strength and perseverance. Strength is the lot of but a few privileged men; but austere perseverance, harsh and continuous, may be employed by the smallest of us and rarely fails of its purpose, for its silent power grows irresistibly greater with time."

"... all theory is grey but green the golden tree of life."

Anyway, I could go on. In the end, the required exam. I wrote my best ever essay and our principal was gushing with praise, announcing that it would be printed in the yearbook. Seriously, quite the achievement, especially since that year, the school was celebrating its 450th birthday with much pomp and celebrations. I played it cool and kept schtumm, waiting for the surprise to hit my family and the world at large.
Alas, as Goethe would say, it wasn't meant to be. An essay on Goethe's Faust was indeed published in the yearbook, only not mine. You see, it so happened that the father of one of my fellow literature class mates had made a large donation to the renovation funds and . . . you get the picture.

In the end, not just literature but an important lesson in social sciences (graft, lobbying, corruption, favourism etc.).

As Faust says at the beginning of the play:


In the afternoon, the sleet turned to rain, the temperature rose barely above freezing and I cycled for a bit along the river - like the poor fool I am. I dwelt on deep thoughts of the injustices of life as a whole and how difficult it all has become until I came across this cheerfull couple battling it upstream. 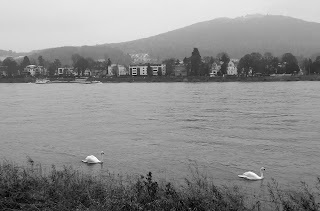 "Rejoice that you have still have a long time to live, before the thought comes to you that there is nothing more in the world to see."