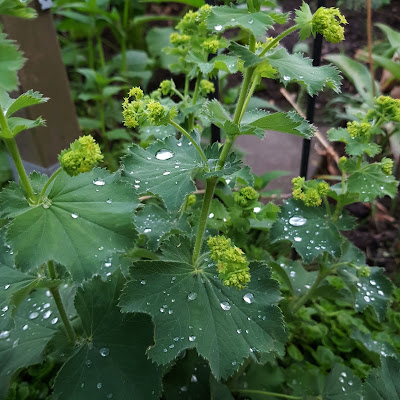 There it is again. That amazing urge to be alive. I wake up and walk through the garden.  Eight different roses are in bloom. After breakfast, I carefully go through the motions to get the dreaded sick cert and R walks me back from the surgery under the flowering linden trees and briefly, the scent reminds us of a visit to Paris many years ago with a moody teenage daughter and everybody arguing for a while until life/love caught up with us. A scent bringing back tiny sparks of memories that mean family and us and always and wide open hearts.

There it is again. The realisation that this memory sits inside our cells and all we need to do is lift our heads to the trees and say, Paris, laughing quietly.

To say that my health is rapidly improving would be an overstatement, but often within overstatements are kernels of truth and frequently at the nub of a kernel can be found the essence of possibility. See, I actually have the energy to type out such a convoluted drivel of a sentence.

Like so many people attached to Ireland one way or another, I spent a good part of the last two days on various news and social media sites following the run-up to the referendum. It's a lot more than voting for the right to have an abortion and I won't go into it. There's others who have done a great job explaining this.

As with the same-sex marriage referendum of 2015, tens of thousands of Irish people working/living abroad travelled home to vote (there is no postal vote for Irish citizens abroad).
Following #hometovote can restore your idea of dedication and may even make you cry.

But then this: Yesterday, a train service from London to meet the ferry in Fishguard (Wales) crossing to Rosslare (Ireland) was experiencing some hold-ups and delays. A considerable number of Irish people were on that train who would now miss the boat and thus their chance to vote in the referendum. Several passengers used twitter et al. to alert the railway co. and the ferry operator and both responded, providing a bus to bring the passengers to the boat, while the ferry operators agreed to wait until everybody was on board.  There were massive cheers from the other ferry passengers.

Life is a string of anecdotes that keep me afloat.