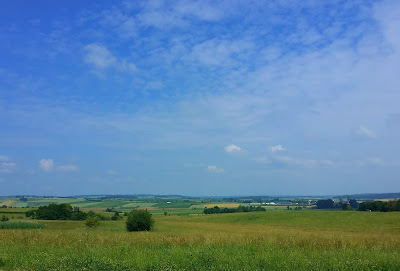 Being unreasonable is the only way that we can have hope.

The Franconian sky on a hot June morning. If you see things the way my father expects it from me, you will of course observe the faint line defined by broken hedgerow and immediately connect this to some deeply buried forcefully forgotten knowledge acquired during years of excellent education.  And after a moment's hesitation, you turn to him and say, surely this is where the Limes was, ending your sentence with a firm note of conviction. He nods briefly and with a tiny glimmer of pride in his eyes.

Has it helped me in life to know that in the 2nd century AD the Romans build this wall across Central Europe, across Franconia? As a defence against the "Barbarians"?And that the great Roman empire collapsed when the Barbarians (the Goths, the Germanic tribes, the Huns, you name it) had enough of being treated like shit? And that the Roman economy crashed because the fat rich Romans ran out of slaves? It has.

Do I sigh in exasperation when my father repeats one of his favourite maxims, namely that history always repeats itself and that in human history, every revolution is followed by a tyrant and every tyrant is followed by a revolution? I do.