maybe too many links

But what will the world do, ( . . . ) if we can't solve the problem of the millions and millions of people  with no home to go to or whose homes aren't good enough, except by saying go away and building fences and walls? It isn't a good enough answer, that one group of people can be in charge of the destinies of another group of people and choose whether to exclude them or include them. Human beings have to be more ingenious than this, and more generous.


This picture.  I actually took a photo of a page from the weekly colour supplement of our newspaper. (The photographer is Mattia Balsamini, he has the story here on his website.) 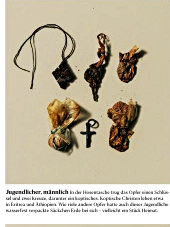 What do we see here?
Again from the photographer's website: "On April 18, 2015, a ship sinks on its way from Libya to Europe. 528 bodies are recovered from the wreck a year later. A team headed by forensic scientist Cristina Cattaneo collected and catalogued all items on the wreck."
You can read about Cattaneo's work here and here.  I hope you will.

So this particular picture shows us the contents recovered from a young man who drowned that day: three crosses (two Coptic) and three small plastic bags of soil. Soil from home. Home soil. Holy soil, maybe.

It's the small packages of soil that stun me. A feeling of loss almost. And for a moment I cannot speak and need to look around me, listen to familiar sounds to find my bearings again. It seems that all the dear people, the hopes, the dreams, the things that I have lost (throw my health into that bag, too), nothing comes close to the loss this young man may have felt holding these bags of soil close to his body on some godforsaken ship about to capsize. But maybe he didn't know it would capsize, maybe he was just waiting for the awful seasickness to abide, for a shore to be within reach, dreaming of friendly European faces to welcome him. He would have been in for a shock.
The Coptic crosses identify him as most likely Eritrean or possibly Ethiopian. You can read about the human rights situation in 2015 in Eritrea here and Ethiopia here.

And now I ask you to have a look at this link.  This is the crew of a rescue ship, Iuventa. A ship that was chartered and organised by a youth organisation from Germany, because:

When people were drowning in the Mediterranean we knew we had to act. So we went out to sea and saved 14,000 lives.

Since then, the EU has stopped all rescue mission, whether organised by European navy ships or NGOs. Instead, all the EU allows now is for helicopters and observer planes to spot migrant ships in distress and to watch the people drown. Watch. People. Drown.
The crew of the Iuventa has been accused of aiding and abetting illegal immigration into Italy, their ship has been seized by the authorities in Sicily.

I was 15 when I learned in school about the ancient Greek concept of xenia, (generosity and kindness to anybody far from home) and the god Xenios (aka Philoxenon or Hospites but basically Zeus in yet another disguise), the revered patron of hospitality and protector of guests, the avenger of wrongs committed against strangers.
Some years later, in sociology 101 at university, were given an essay by Hannah Arendt to discuss. The consensus then was, of course, how great and magnanimous the free world has helped the persecuted of WWII. We agreed, of course.
It's worth reading that essay again. "We refugees", she called it. But it's long, so just a quote:


Then there is this story by Wade Davis that I wrote about several years ago (here) when he and his team were travelling by Jeep from an outpost in the Sahara desert and met a caravan of six men and 12 camels transporting salt. The men had been forced to stop in the desert to dry out the salt before continuing their journey. They were down to their last quart of water, 150 km from the nearest well with a cargo and animals that represented the entire wealth of their families. They had sent one of their young mates with one camel to find water. Davis continues:

While we waited for their friend to return, the leader of the party kindled a twig fire and with their last reserve of water offered us tea. It is said in the Sahara that if a stranger turns up at your tent, you will slaughter the last goat that provides the only milk for your children to feast your guests. One never knows when you will be that stranger turning up in the night, cold and hungry, thirsty and in need of shelter. As I watched him pour me a cup of tea, I thought to myself, these are the moments that allow us all to hope.


I leave you with this: