history will teach us nothing 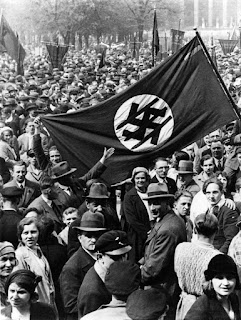 A picture from Berlin, 1 May 1932, the year anybody who wanted to could put two and two together about the rise of hitler's fan clubs.
This rally was organised by the Iron Front, a coalition of social democrats and various workers' and trade union groups who were in open in resistance to the growing nazi regime. They used their logo - three arrows pointing downwards - to strike through the swastika and symbolically destroy it. The Iron Front was not without enemies, on both sides, left and right, I am not sure what I'd made of them.
On that day, possibly most of the demonstrators felt they were exercising their freedom of speech, freedom to congregate and that their protest would open eyes, that they could show what is what.
For me, this picture expresses confidence and political awareness.
The Iron Front was banned about a year later, on May 2, 1933, the workers' movements and all unions forcefully disbanded. The nazi dictatorship took its course.

I wonder what happened to these same people who so openly marched in their thousands less than a year before the nazis came to power. Did they think it would blow over by the next election? Did they stay quiet, were they afraid, did they change their minds? How many were persecuted? How many played along? How many changed allegiance and followed the mob?
Remember: the nazi party was elected not by a majority, hitler was appointed after his party barely got in with about 43% of the votes. They had to juggle along with a shaky coalition based on false promises. But here is the catch: the election that brought hitler to power took place after months of massive campaigning with violent intimidation, repression, fake news and endless propaganda. Sounds familiar?