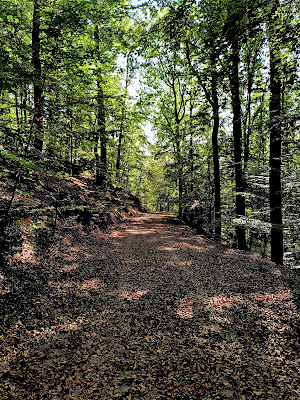 As we walked through this sunlit forest, I once again felt such betrayal, such loss. How can we ever again call a forest like this one by its name? Beech forest, Buchenwald. (They chose that name for a reason. The monsters in their leather coats and shiny boots.)

That was two weeks ago. Now, autumn has arrived, I am looking for my cycling gloves and we turned on the heating. Autumn could be lovely if only it wasn't a gateway to winter.

I am unwell and eventually called the covid hotline, on a Friday evening, no less. In the past, this would have been a bit of a blocked nose, no fever, sore throat, headache, shivers sort of scenario. But apparently, I tick too many boxes. Now waiting for my test slot, while R hovers at a distance with cups of tea.

As for the other news, I leave you with this, because, whether he's ill or not, whether he knowingly passed the virus on or not (and in my humble opinion, he did), whether it matters or not that the news broke after the stock market had closed for the day, stay focused:

First, let me say that I am fine with Trump being called a fascist because he is using fascist tactics, and it's a word that resonates with the public. We need a wide, inclusive, and resolute American opposition movement, and this word conveys the necessary urgency.

But I've largely called him an authoritarian or autocrat instead of a fascist because "fascist" implies loyalty to the state. A fascist wants to embody and expand the state and usually has imperial ambitions. Whereas Trump wants to destroy the U.S.: he wants to strip it down and sell it off for parts to both domestic and foreign backers. His cohort's ambitions are similar to what oligarchs and other hyper-capitalists did to the U.S.S.R. after its collapse — which is not surprising because the Kremlin and an associated network of plutocrats and oligarchs are the prime backers of this operation.