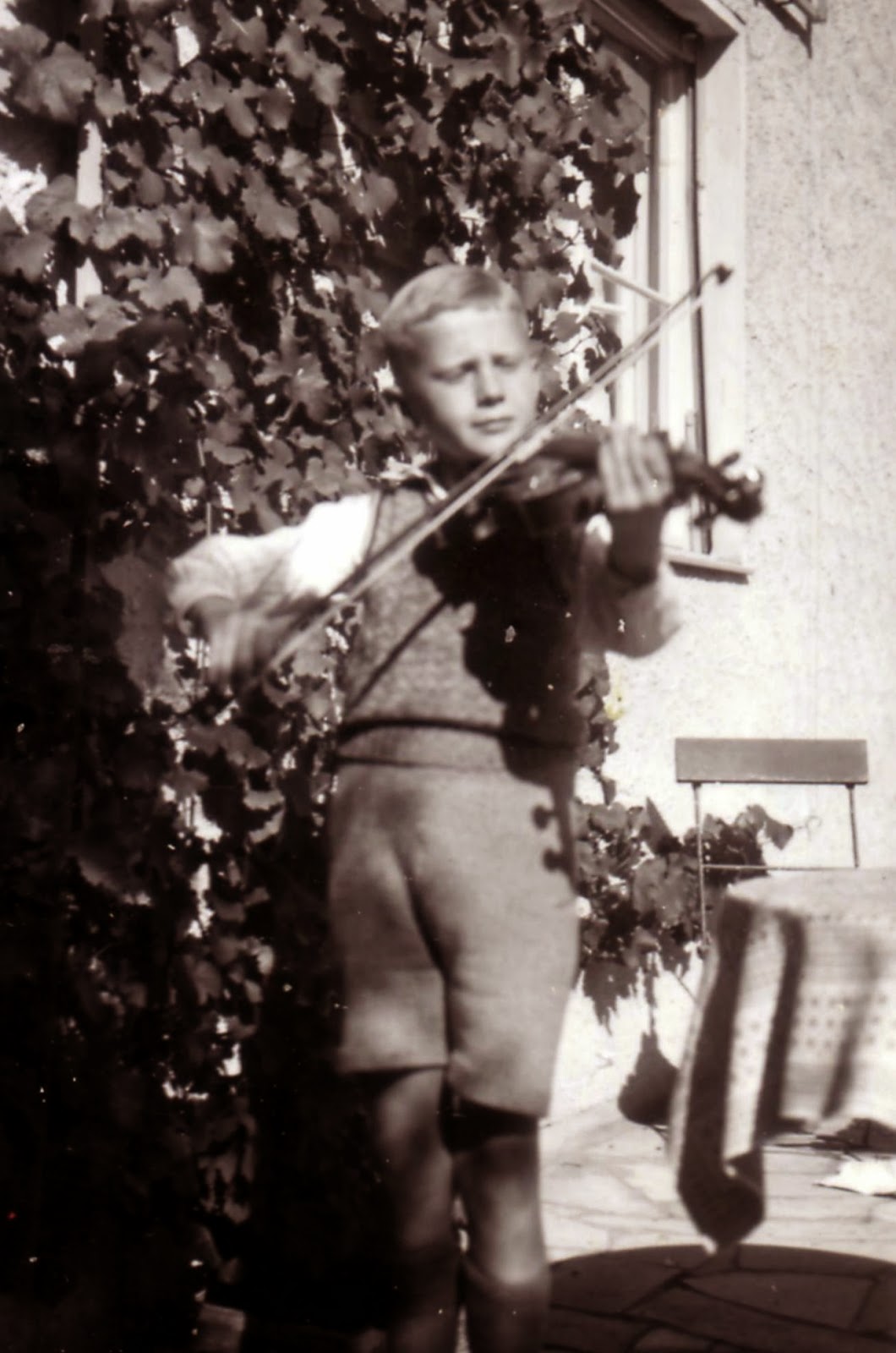 This picture is a fake, my father never learnt to play a musical instrument. He is posing with his brother's violin. He doesn't sing either, he sometimes grumbles along way out of tune. On Sunday mornings we would find him sitting downstairs, playing his records, symphonies mostly, Schubert, Haydn and Beethoven, while going through his notes and science journals and from time to time, he would stab the air with his pen, conducting his imaginary orchestra.

The window behind him is where he now has his bedroom. It used to be my grandfather's study before the war. After the war and after the American army had moved out - they stayed in the house for four years - my grandparents moved upstairs and the ground floor was turned into an apartment. My father moved into it soon after he left my mother, when he sneaked away with his car load of stuff while she was recuperating from yet another nervous breakdown somewhere on the coast. Apparently, she arrived home to find half of everything gone. My sister told me that he left because of the blood. My father faints at the sight of blood. I have seen this happen a number of times, he keels over like a felled tree. Bang and out. When my mother cut her wrists, he called my sister and hid in the car, she told me. And about the buckets and the sheets and the stains in the bedroom. The off-white carpet.

I was on the other side of the equator at the time. The last time I had seen both of my parents together, maybe two years earlier, they could not stop fighting and so I took my little girl and together we walked down the street. It was a hot evening and we waited around the corner barefoot until they stopped shouting. I packed my stuff later that night and told my father that it was time for him to get out, too. He just shook his head.

Last week when I called him on his birthday, he was still in bed. I could hear in his voice how he immediately regretted telling me that. Too late. I coaxed it out of him, how he slipped on the last step down to the garden, how he crawled to his car and pulled himself up and drove to the meeting with his Swedish friends and only noticed the pain when he got home. My father is a scientist and to him, the body is a set of plumbing works with chemical interactions and a slightly complicated set of nuts and bolts to hold it all together. Nothing to get worked up about as long as there is no visible blood.
This week, he calls to inform me that yes, he has seen a doctor this morning but only to have his own diagnosis confirmed. A couple of bruises, so what. The way we all get so worked up about nothing. Tsk. Tsk.