Hidden between faded holiday pictures, I find this letter from my grandmother. (The holiday pictures are from my aunt's first trip to Greece, sometime in the late 1960s. My wild aunt, my father's only sister, long dead. Another story.)

Barely two weeks after this letter was written, the US troops arrived and the war was over in Franconia.
The front door of my grandparent's house, now my father's house, is made from strong oak and there is a small window in it. When we were kids, we would climb on a chair and play the game of opening and closing this small window, shouting hello, hello, hello.
It was through this small window that my father, sent there by his parents (go, speak English), saw his first black person, a GI pointing his gun at him, and said "Hello, I am a schoolboy".

My grandmother's birthday is on May 30th. Always celebrated with fresh strawberries and large bouquets of Margeriten (leucanthemum), her favourite meadow flowers.
My father has cried real tears three times in my presence. When his brother died a sudden death in 1965, when Germany won the football world cup in 1974 and when he first told me of his mother's birthday in 1945.
He had gone out early to pick the flowers, the table was set under the plum trees, strawberry cake, when the garden gate opened and there were his brother and his sister, exhausted, dirty, hungry. 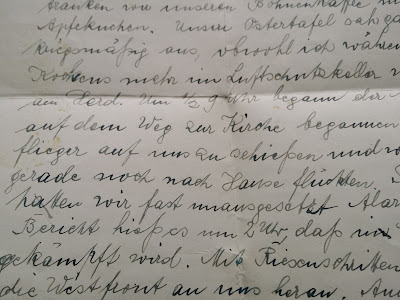 Today is Easter Sunday! We enjoyed our Easter baskets, ate fresh fruit salad with sweet curds and later, we even had a cup of real coffee with our apple cake. Our Easter spread didn't look very warlike.
But when I prepared it, I had to spend more time down in the shelter than in the kitchen. The air-raid sirens went off at 8.30 in the morning and while we were on our way to church, low flying aircraft started to strafe and we barely made it back home unharmed. Since then there has been no end to the sirens.

We hear that there is fighting in M. and that the Western front is approaching in giant steps. The Russians are already in Vienna. Is there any help for us? When will we meet again? I am keeping N at home with a stomach ache but his school mates are already in uniform.  Still no word from A, all our letters have come back.
Now it is quiet and peaceful but what will it be like tomorrow. Let's not think ahead.
How much would I have liked to climb B hill today but nobody would join me. They are all afraid and hiding indoors.

Write to us. We may not be able to stay in touch for much longer. Please answer.
Everybody sends their love but especially, your mother.


sweet curds: a very German dairy product, I just had some earlier
the shelter was the basement of my grandparent's house
M. is a town about 30 km away
N is my father
A is his older brother, in uniform and at the time last known to be fighting in Croatia or Serbia, but as we found out later, he had already deserted and was walking home
B hill is a local attraction with a viewing platform
I wrote about my father's account of these days here.
My aunt E who had started to study medicine before the war was at the time working in a military hospital in Austria.