For reasons I should not have to explain, Holocaust denial and showing the hitler salute are criminal offences in Germany.

Every so often, I come across an innocent looking exchange student, visiting scientist, tourist etc. expressing their outrage about this terrible offence to the universal (?) laws of free speech. At least, they complain, you must listen to the other side. The what? I reply before the conversation takes a nasty turn.

And, they often add, your journalists are biased because they rarely allow holocaust deniers a forum.
(For crying out loud.) I recently have started to reply with something along the lines of this twitter meme: If someone says it's raining, and another person says it's dry, it's not the journalists job to quote them both. It's their job to look out the fucking window and find out which is true.

Meanwhile the CEO of fb, a philanthropist, who believes that - having been raised in the Jewish faith - religion is very important, wants to allow fb users to make unintentional mistakes and for this reason, will not remove posts that deny the existence of the Holocaust.

I feel like we are standing close to the rim of the volcano, peering down into the crater, asking ourselves, will it erupt, will it stay silent? Surely, we try to calm ourselves, there's common sense, decency, experience, history, memory, empathy for godssakes.
Don't count on it, a friend told me yesterday. Being ignorant is the new trend.


When the generation that survived the war is no longer with us, we'll find out whether we have learned from history.

Too far fetched? Connect the dots. 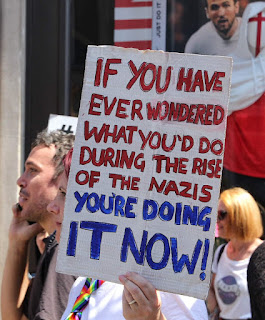 As for fb and friends, have a listen how your data is helping it along: