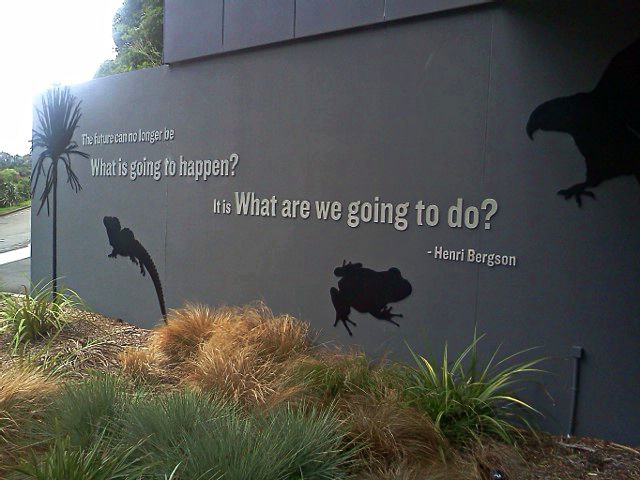 In the early, very early morning hours I look out the kitchen window into the grey and wet garden. Desolate is a word I could use to describe the view but of course it's really just January - and jet lag.

A bit more than one day ago, I stood in the shade of frangipani and breadfruit trees by a small beach, watching plastic bottles drifting on the currents of the deep blue South China sea, gently landing and resting on the golden sand for a short moment before being whisked off by a uniformed young man. I tried polite conversation about the number of bottles he picks up in a morning and whether they come from ships or Indonesia or Malaysia. But he just smiled, his teeth very white, and bowed reassuringly. All clean now madam, and off he ran after the next bottle. My shirt was sticking to my back by the time the taxi driver offered me a cool cool bottle madam, and later on the plane, the supply was once again seemingly endless. Flying for three days includes a lot of plastic bottles.

Through my kitchen window I watch rain turn to sleet. I can faintly remember the birdcalls that now form the soundtrack to my grandchild's days. My garden in winter is silent.


Earlier, I calculated my life expectancy online. The Swiss offer me a stunning 30 years, the US is less enthusiastic with a mere 21 and Germany cuts it to 17 more years but only with a 50% probability and I had to click my way through three disclaimers before I got the result.
(Obviously, I left out the bit about my shitty disease.)

A week ago, I stood in front of the sign above, stunned and suddenly too much aware of what is ahead of us.

"The French philosopher Henri Bergson (. . .) developed a so-called process ontology, which claims that nothing in the universe is ever fixed. In fact everything that exists is an ongoing and evolutionary process (élan vital) without a fixed goal. And since—according to Bergson—our rational mind is solely capable of understanding and therefore predicting rigid entities but not processes, any belief in the complete predictability of the universe must be abandoned. Instead, we should focus on the possibilities of an open, spontaneous and creative future, which we will only then be able to understand, if we get more in touch with our so-called intuitive faculty, which is able to fathom a process in its processual state."