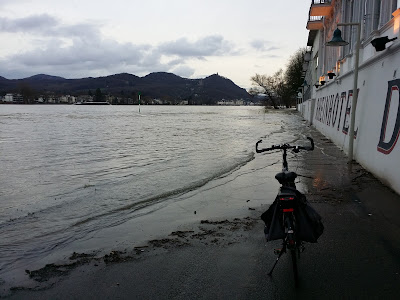 This is what defeat looks like, thankfully. The river showed me my place and when I arrived back home after a mere half hour, my knees were buckling under me and my conscience kicked in.

On a good day, I can cycle on and on until that castle ruin on the other side is a long way behind me. (In my fitandhealthy life, I cycled all the way to almost Switzerland.)
But it has been a while.

So yes, I am miserably unwell but what else is new. Keeping fingers crossed that it's just a bug or a virus simmering below the surface. Even cancelled the all important meeting with the big boss on Friday. Exhaustion is my middle name. Consequently, this post is all over the place.

But otherwise life is good enough, seriously. We got the first (hopefully of many) bunch of daffs. 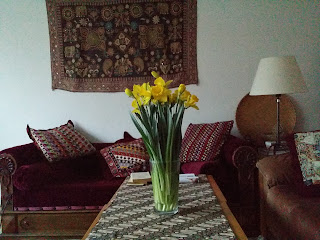 The dawn chorus is swelling, mostly blackbirds. The ladybirds that have been hibernating inside the house are getting restless. They make these tiny sliding noises when they crash against the window panes. Don't worry, they are tough.


I have been reading, as always, and this here stuck in my head:

I’d like to teach my daughter to protect herself. I’d like to teach her not to be thankful for the leering eyes of a man on the street, or the groping hands of a man at a bar. I’ll teach her that she is the ruler of her body, and I’d like to imagine a world where she can go to the grocery store at night and not walk fast to her car with her keys poised like a weapon.

Because I tried, I swear I tried. I wanted her world to be so much safer.  I wanted her to grow up feeling free and welcome and fearless almost everywhere. I want all women to feel free and fearless and I think every single person I know wants the same and yet, I have failed. For a while I thought if I encourage her sense of fearlessness that surely will do the trick. But before I knew it, she learned that "N O spells no" in kindergarten - and we pretended it's a funny game, enrolled her in self-defense training not once but thrice and arranged for safe passwords, secret codes and pretend phone calls while walking home from the night bus. Mothers should not have to buy pepper spray for their daughters or warn them about the safe way to dress because men cannot help it or whatever shitty backlash comes next.

Meanwhile, listen to the fabulous NZ Prime Minister Jacinda Ardern, who is pregnant with her first child and will show the world that work and motherhood are not incompatible.